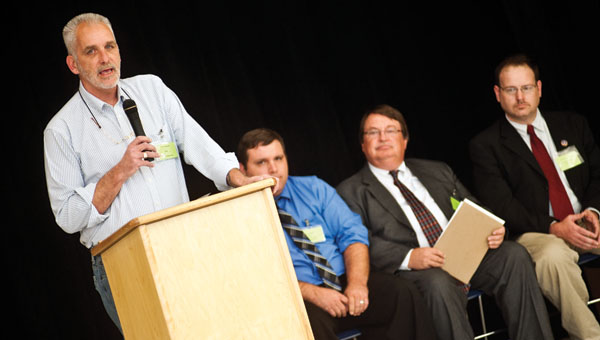 BURLINGTON — Jobs — where they are and how county residents can get them — was the dominant theme as candidates faced off in one of the first forums before the November general election.

On Thursday the Concerned Citizens of the Burlington area hosted its traditional Meet the Candidates forum.

“I don’t think information is put out to the people on how to obtain these jobs,” Edwards said. “It would be nice to tell people what kind of training they could get to get the jobs.”

Edwards said with more jobs crime rate and drug use would be cut.

“We should do active recruiting (of industry),” he said.

He also said a commissioner should be involved in his work for his entire term.

“Don’t wait until the last year,” Edwards said. “We need to do something from the start to the finish, not when it’s convenient. We need to keep people aware of the situations. We’ve got people wondering what is going on in the county. What I can promise you is I will work hard. Working motivates me. What I start I finish.”

Hayes, who is running for the second time as a commissioner after his appointment in February 2012, stated 400 jobs have come into the county since the current commission took office.

He also detailed the most recent jobs brought in from 50 jobs from Bimbo bakery distribution at The Point industrial park to 100 jobs expected from a proposed diesel refining operation, plus a pizza chain and burrito restaurant that may be coming to the county.

“I never quit looking for jobs,” he said.

Hayes also said he was a strong believer in public safety, especially supporting the sheriff’s office and the county EMS.

“We give (the sheriff) everything we can without shutting off the lights,” he said.

Bailey said the issue is not just bringing in more jobs but jobs with a higher pay scale.

“I see a lot of jobs are low-income,” he said. “One way to address that is for the legislature to raise minimum wage to $10 an hour. That would give our citizens more buying power.”

“We also need to invest more into adult education,” he said.

Smith agreed education is the key to solving many of the problems in the state.

“My goal is to give people a pathway out of poverty,” he said citing $700 million was in the budget for education.

He also threw his support to blending learning where students can take courses online as well as in the classroom.

Approximately 40 attended the forum at the Burlington Elementary School.

Budget is enough for bills?

Right now the county appears to have $1.6 million in carryover going into next year. That’s an increase of more... read more