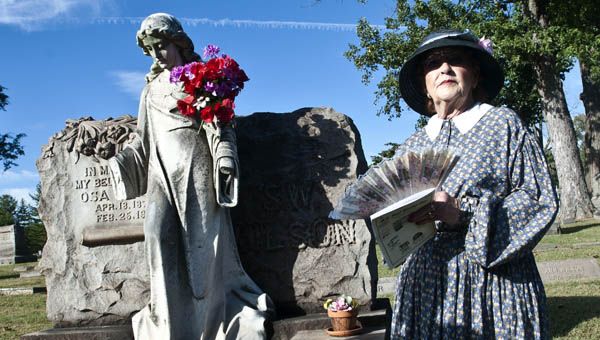 According to the program all the stories are well documented and true unless otherwise stated. “Town talk” it says.

The 2014 Historical Walk through Woodland Cemetery featured 33 stops that divulged the rich and interesting history of Lawrence County from the mouths of the people who helped shape it, or at least from people dressed as those people.

The Lawrence County Historical Society’s walk tells the story of how and why things came to be in a county that is by all accounts rich in history.

“I was a conductor on the Underground Railroad,” Chris Saunders, dressed as James Ditcher, said. “I am buried right over there.”

Ditcher was known as the “Red Fox” of the Underground Railroad and assisted more than 300 slaves on their road to freedom.

The stories of Richard Lambert, the first casualty in the Civil War from Lawrence County and John Campbell, the founder of Ironton, and many others were told during the Historical Walk at Woodland Cemetery. The self-guided tour of the cemetery holds some of Lawrence County’s most prominent historical figures.

Another story is that of Osa Wilson, who died at 34. She was allegedly pushed down a flight of stairs while pregnant with her last child. A statue of Wilson near the gravesite bears a permanent mark that resembles a handprint on the side of her face which is why she is often called slapped lady.

COLUMBUS (AP) — With a milder winter predicted, experts say heating costs should be lower for most Ohioans. Many energy... read more