Should it be real 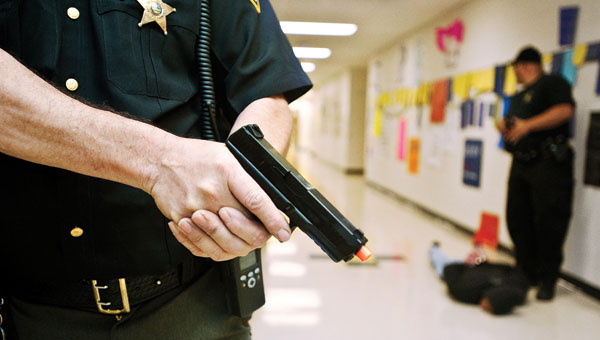 Whether a downpour would greet them when they started home at 3 p.m. was the biggest concern of students and staff at South Point High School on Monday morning.

By 10 a.m. those worries had evaporated as something more deadly had invaded the school.

A shooter had slipped into the high school. Another was inside the middle school. Both roaming the halls, weapons pulled, searching for what, no one knew.

The principals at both schools dialed 911 sending out a vital SOS.

Within minutes Lawrence County Sheriff Jeff Lawless had a command post set up in the lower parking lot of the high school. Fire trucks and EMS ambulances lined the road up the hill.

Back and forth Lawless, speaking into one of his two radios, got constant updates from his dispatcher who was on the phone with one of the principals.

“On the middle school side, shots were fired,” Lawless told his deputies, all in ballistic gear. “You guys ready to go in?”

Instantly, the team rushed up the hillside to the school. Circling the drive to the back of the school was a county EMS ambulance, that crew wearing bulletproof helmets and vests.

The next word Lawless got was a “Code 21,” the shooter at the high school had been subdued.

“The middle school is still active,” the sheriff said.

Fortunately for all involved, the shooters so actively sought were harmless, just staff personnel playacting in the scenario above.

The goal of the annual tactical training session for all emergency and law enforcement personnel, however, was not a game. It was to offer a test run should such a scenario take place to prepare all personnel for action.

And all the participants took it as seriously as if Columbine had come to Lawrence County.

Word came down to Lawless that the shooter in the middle school had taken hostages. Trained negotiator Jim Howard started up the hill with the sheriff. They entered the high school moving through a connecting room to the middle school.

In an avuncular voice Howard, using a phone at the school’s office, tried to disarm the shooter.

As Howard kept the shooter talking, Lawless ran up the stairs to the second floor where the shooter had commandeered Room 207 with student hostages.

“We don’t want you to get hurt,” Howard said.

Outside that room six from the SWAT team stood with guns aimed at the classroom door. One deputy knelt in front of the door, gun balanced on his ballistic shield, ready to take the first shot. In this case, the weapons were Air Soft guns that shoot a plastic BB, harmless if fired.

Suddenly, the door opened, and the shooter walked out.

“Get down. Get down,” officers screamed out at him.

Handcuffed, the shooter was walked down the hall. Just as quickly the assailant Mike Clay, aka the assistant principal at Burlington Elementary, was released from his cuffs and started to joke with his one-time guards.

For the past couple of months Clay, Howard and others have fine-tuned the scenario they just played with realistic dialogue.

“The local teachers have no training,” Clay said. “This is something to fall back on. They can see firsthand. Our No. 1 job is to protect the students.”

One concern of Lawless’ was the lack of communication once the teams got inside the school.

“The MARCs radios are not good communication,” he said. “And we pay $20 a month for 21 radios. The dispatch radio worked better. We will have to work with that, figure that out.”

By 11 a.m. two scenarios had already been played out with a third one planned for the rest of the day.

SOUTH POINT — With fall in the air and leaves ready to turn brilliant reds and golds, the People for... read more