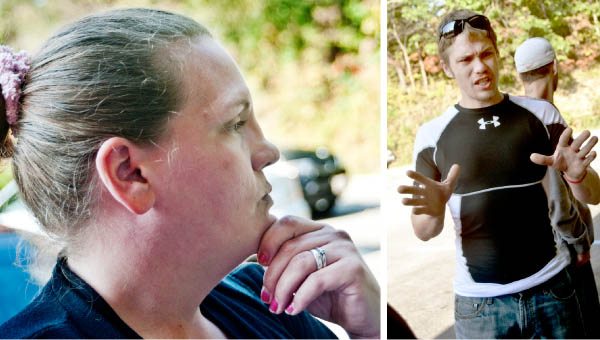 (LEFT) Katie Clarkson talks about her positive experiences at the Community Counseling and Treatment Services Inc. (RIGHT) Robert Stevens explains why is it a bad idea to close the center.

“That’s my family in there,” she said. “Just seeing them is so hard.”

Cooper has been drug-free for a year. She said she now has a job and was about to regain custody of her three children. Child Protective Services removed the children from her care because of her addiction.

Cooper credits the staff of CCTS and its owner, Paul Vernier, for changing her life.

Nearly all of CCTS’s 1,200 patients on Tuesday were at the building at 4282 State Route 93 in Pedro to meet with Vernier and his staff. Many of their stories were similar to Cooper’s and the counseling center not re-opening is a thought they admit causes some concern.

CCTS was shut down this past Thursday after a search warrant was executed to collect evidence for a myriad of possible violations after a lengthy investigation by several agencies in regard to Vernier and his staff allegedly engaging in a pattern of corrupt activity, fraud and trafficking in prescription drugs.

“I stand behind CCTS, our owner, our coworkers and our clients,” she said. “I would not have continued working for a facility I felt was unethical.”

The investigation began after the agencies involved in the search allegedly received several complaints from citizens about the operation of the facility.

“People go by here and they see all kinds of recovering drug addicts in the parking lot and they immediately think that it’s a bad thing,” Jason Snell, a patient at the center and founder of a Narcotics Anonymous group in Ironton, said. “But what they don’t realize is that it’s a good thing. We are here and not out doing other things. We are getting treatment and we are off drugs. Getting more than 1,000 addicts to attend a 9 a.m. meeting is a miracle right there. Today we are not here for Suboxone. We are here to get information and support each other. So many of us would be dead right now if it weren’t for this place. Mr. Vernier’s always been worried about us, not himself, and that’s why he wanted to meet with us today.”

Search warrants were also executed at two facilities in Portsmouth owned by Vernier as well as his residence.

No arrests were made after the search warrant was executed.

Robert Stevens said he has spent most of his life as an addict. It began when he was 12 years old after having his wisdom teeth removed. He has been drug-free for 36 months.

“Before I started coming here I was known for two things: being a triplet and drugs,” he said. “I started trafficking when I was 18 and have two convictions. Dr. Vernier was the only person who has been able to help me. I’ve been clean for two and a half years now and I get to give my 15-month-old baby the life it deserves. Many of us who lost children to CPS have gotten them back since we started coming here.”

The meeting, his patients said, was for Vernier to inform them he was still going to help them any way he can. For some of his patients, however, the center’s closing creates a situation in which many would rather not be.

“Now there’s 1,200 clients kicked to the curb,” John Adams, a patient of more than a year, said. “This affects the lives not only of the people who can’t come here now, but also our families. We all admit it will be difficult to not go down a negative road again and many of us have had children, gotten jobs and really done great since beating addiction.”

Jessica Lyons lost a child to Child Protective Services five years ago because of her heroin addiction.

“I just had twins and I’m not in danger of losing them,” she said. “This place saved my life.”

Katie Clarkson and her husband, Carl, are both recovering pain pill addicts. Katie said when they arrived at Community Counseling Treatment Services they had sold everything they owned to buy drugs and were in danger of losing their home. Carl said he has previously been a patient at two other Suboxone clinics, but both failed to fend off his addiction.

“Suboxone is just 20 percent of the treatment here,” Katie said. “The other 80 percent is the counseling and that is what most of us came here for. (Carl and I) now own our own home and I graduate from college in nine weeks. We are doing things we didn’t think was possible. We have come a long way in two years.”

Misconceptions about Suboxone, Snell said, is the main reason it is perceived negatively.

“Suboxone to an addict is like insulin to a diabetic,” he said. “It’s not just another drug. I’ve tried the 12-step programs and the sponsors and I failed with all of those. This place works and it’s not just because of the Suboxone. It’s because we all reach out to each other and want to see each other do better.”

Regardless of whether the clinic re-opens, Stevens is adamant he will not revert to being the person he was two and half years ago.

“I’m going to take the tools Dr. Vernier and the people at this center gave me and take steps forward,” he said. “Not backward.”