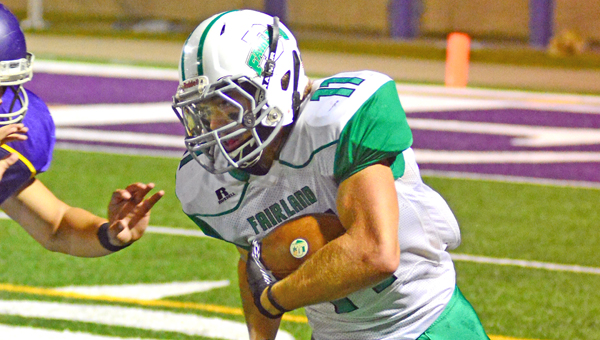 The annual rivalry between the Fairland Dragons and Chesapeake Panthers will resume this week on Phil Davis Field as the teams begin Ohio Valley Conference play.

Chesapeake comes into the game 3-2 while the Dragons are 0-5.

“They have some outstanding skilled players and their line is bigger than last year. It’s much bigger than our line. We’ll definitely be at a disadvantage.”

Chesapeake has won three straight after opening the season with losses to Oak Hill (40-0) and Gallipolis (30-0).

Johnson Central and Lucasville Valley are both unbeaten and Wheelersburg is 4-1. The Dragons’ opponents are a combined 19-6.

The Dragons should have fullback Sidney Tucker this week although running back Nathan Campbell is still suffering from a dislocated elbow and is not expected to play.

Short has been a passing machine for the Dragons. After throwing for 2,891 yards and 27 touchdowns last year, the senior signalcaller has been the key to the offense.

Against Meigs, he was 26 of 42 passing for 601 yards and six touchdowns. Murphy caught nine passes for 230 yards and two scores in the game.

The following week against Gallipolis, Short was 27 of 44 for 276 yards and four touchdowns. Murphy had 11 receptions for 127 yards and three scores.

Chesapeake has been relying on its running game, especially quarterback Casey McComas.

In the win over Notre Dame, the Panthers ran for 308 yards with freshman Cecil Fletcher getting 129 yards on six carries. McComas added 91 yards on 15 attempts.

McComas had 107 yards on 14 rushes against Symmes Valley and 88 yards on 13 tries against Warren.

The game figures to be a matchup of the Panthers defense against the Dragons’ offense. The Panthers’ defense is led by defensive lineman Austin Carpenter and linebacker Brad Meadows.

NOTE: The Thursday edition of The Tribune incorrectly reported the game to be filmed by Ohio University Southern. The game being filmed is Fairland at Chesapeake and will be available for viewing via replay on Armstrong channel 4 and Time Warner channel 25 as well as The Tribune website.

Jim Walker jim.walker@irontontribune.com   It will be power vs. finesse. The Coal Grove Hornets will rely on their big offensive... read more