Want to see something really scary? 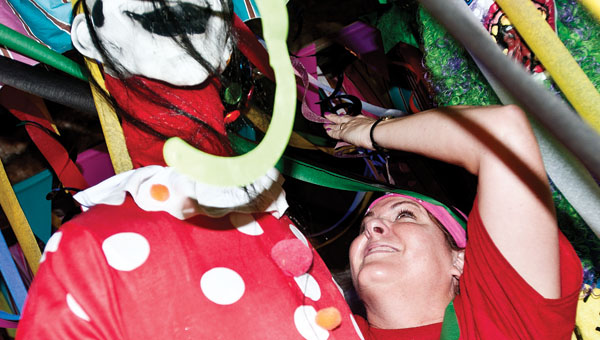 Joy Howard hangs up decorations up in the Haunted Tunnel Saturday. (

At 7 p.m. on Friday the Ironton Lions Club’s Haunted Tunnel opens. Although organizers have redesigned, reworked and redone the attraction the fear that’s inside is very much the same.

“Some of the things many of the people who go through the tunnel were used to have been changed” Tony Howard, Ironton Lions Club member, said. “It has a new look inside and several things have been added and moved around.”

Without giving too much away, Howard said, illusions, videos and clowns are some of the tunnel’s new features.

Cleaning and maintaining the tunnel is a year-round job for members of the Lions Club. But from 7-11 p.m. every Friday and Saturday in October, Howard said, it takes 20 Lions and 20 other volunteers to haunt folks in the Tri-State.

Located across from Ironton Hills Shopping Center near the U.S. 52 and State Route 93 intersection, the tunnel is the former State Route 75 highway tunnel the Lions Club converted into a one-of-a-kind haunted attraction in southern Ohio.

All proceeds go back into the community through various civic projects and to support area organizations such as Ironton In Bloom, the Ironton-Lawrence County Memorial Day Parade Committee, the City Mission and others.

The tunnel is the Lions Club’s No. 1 fundraiser, and keeping with the spirit of the Lions International, focuses on helping those who are vision impaired. The Lions have sponsored three service dogs in recent years, each at a cost of more than $8,000 and money raised from the tunnel also goes towards Lions Club scholarships, Relay for Life, eyeglasses and corrective eye surgery.

The tunnel was vandalized in 2011 and the Lions Club made a commitment after that to rebuild the tunnel’s interior bigger, better and scarier than ever.

October is “Talk About Prescriptions Month” and marks the beginning of this year’s Medicare open enrollment period. It’s the perfect... read more