TLC marks special anniversary with, what else …. A cleanup 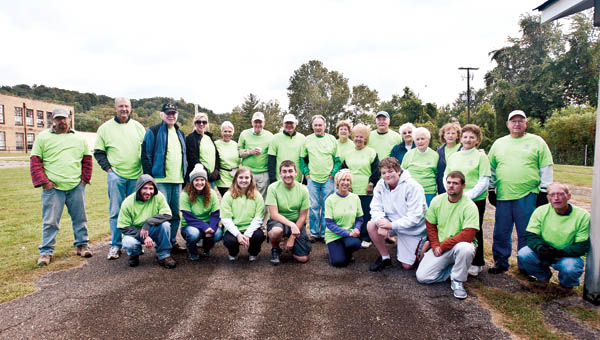 Volunteers gathered behind the Chesapeake Community Center before setting out for the Operation TLC event Saturday.

CHESAPEAKE — The rain held off, but the cold didn’t. However, chilly early morning temperatures did not dissuade about 25 members of Operation TLC to get out of a warm bed to pick up trash.

Saturday’s drill was the same as before. Volunteers showed up just before 9 a.m. at the picnic shelter behind the Chesapeake Community Center to get their cleanup gear of gloves, trash bags and litter sticks.

Before they hit the road, they sipped on hot coffee and munched a couple of doughnuts. This was the last of the three cleanups TLC does each year. But this one was different. It was a celebration of an anniversary, because 10 years ago the grass-roots organization was created.

“This comes from a passion,” said Billie Smith, co-founder of the organization, along with Taunya Wilson. “We have a passion. We want to see it clean and enjoy it ourselves. This has been a calling. The Lord has given me this to do. Whenever we are ready to throw in the towel, someone comes up with something that keeps us going.”

Joining Smith were members who were there from the beginning, plus a lot of relatively new faces.

This was the second or third time for Corey Johnson, a senior at Fairland High School.

“This is a really good idea,” he said. “There are not a lot of people who take the time to pick up trash. They drive by and don’t consider who does this. And this is a way to give back to the community.”

Along with Johnson was classmate Sara Gould.

After the kaffeeklatsch was over, Smith got everyone assembled for a special group photograph in honor of TLC’s 10th year and 30th cleanup.

“It is such an honor to be a part of this group,” she told the volunteers. “You are such wonderful volunteers.”

Saving Abel to rock with own sound