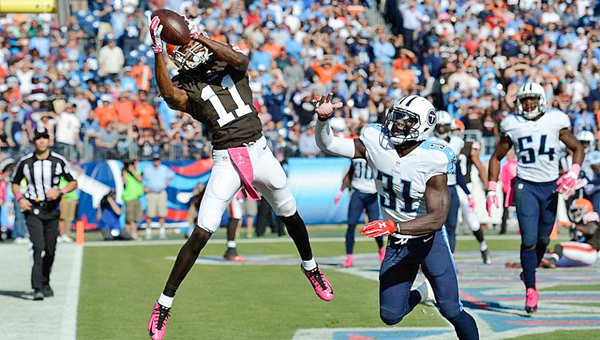 Cleveland wide receiver Travis Benjamin (11) catches a 6-yard touchdown pass with 1:01 left to ply that gave the Browns a 29-28 win over the Tennessee Titans on Sunday. The win was the largest comeback by a road team in NFL history. (Photo Courtesy of The Cleveland Browns.com)

NASHVILLE, Tenn. (AP) — The Cleveland Browns shook off a sluggish start with a finish for the NFL record book.

Brian Hoyer threw a 6-yard touchdown pass to Travis Benjamin with 1:09 left, and the Browns rallied from a 25-point deficit to beat the Tennessee Titans 29-28 on Sunday in the largest comeback in league history by a road team.

Only two other clubs have come back from bigger deficits in the regular season. San Francisco rallied from 28 down in beating New Orleans on Dec. 7, 1980, and Buffalo trailed 26-0 before beating Indianapolis 37-35 on Sept. 21, 1997.

Every Browns game this season has been decided by three points or fewer.

“I did tell them after the game they got to stop doing it,” first-year Cleveland coach Mike Pettine said. “I have an EKG scheduled for tomorrow because my heart can’t take many more of these.”

Cleveland snapped a seven-game road losing streak by scoring 26 unanswered points, including 16 in the fourth quarter.

It was the biggest regular-season lead blown by the Titans (1-4) — a franchise that once squandered a 35-3 advantage to Buffalo in the playoffs as the Houston Oilers.

“Unbelievably tough loss for us today after we played so well in the first half,” Titans coach Ken Whisenhunt said.

Tennessee turned the ball over on downs at the Titans 42 with 3:03 left when the Browns stopped Whitehurst on fourth down and less than a yard to go. Whitehurst said he didn’t hear a whistle stopping his forward progress short, and he finished by sticking the ball out. Whisenhunt said he thought about punting.

“But I felt like with Cleveland having one timeout, we had a chance to win the game,” Whisenhunt said.

Hoyer finished off the comeback with his second TD to Benjamin in the quarter for Cleveland’s first lead.

The Titans had one last chance with 1:09 left. But time expired just after Whitehurst found Kendall Wright on a pass past midfield.

Hoyer finished 21 of 37 for 292 yards, and he started the Browns’ comeback with a 1-yard TD pass to Jim Dray just before halftime. He also connected with Benjamin on a 17-yard TD pass after Cleveland got the ball on a free kick off a safety early in the fourth quarter. Tank Carder blocked Brett Kern’s punt through the end zone.

It’s the fourth straight loss for the Titans, and it could be very costly with a handful of players limping off injured.

Whisenhunt streamlined his offense in trying to jump start his struggling team. It worked as the Titans scored on two of their first three drives.

Locker was leading an 80-yard drive when cornerback Buster Skrine blitzed, hitting Locker in the head. Locker’s hand hit Skrine’s helmet as he threw, and the quarterback immediately signaled first down before going to the sideline and to the locker room.

Two of Whitehurst’s first three passes went for TDs, with the second a career-long of 75 yards to Justin Hunter for a 28-3 lead late in the first half. That was it for the Titans’ offense.

FOXBOROUGH, Mass. (AP) — Maybe the Bengals thought they would be able to push around the Patriots, who were coming... read more