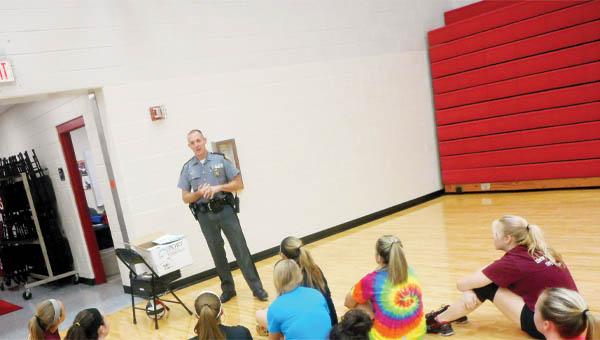 The Tribune/Brandon Roberts
Ohio State Highway Patrol Trooper Ryan Robirds speaks to the Coal Grove Hornets volleyball team about the statewide “5 Minutes for Life” initiative, which includes talking for five minutes with student-athletes about responsible decision-making, leadership and encouraging their peers to live a drug-free lifestyle.

COAL GROVE — Trooper Ryan Robirds of the Ohio State Highway Patrol talked to the Coal Grove Hornets volleyball team for five minutes on Monday. Robirds told the team in regard to decision-making, it is five minutes for the rest of their lives.

“It’s about you making good choices and helping other people make good choices,” Robirds said. “Don’t be afraid to tell someone else not to do something. If just one time you feel like you don’t want to get involved it could change the rest of someone’s life.”

The program is called “5 Minutes for Life” and centers on officers from the OSHP, Ohio National Guard and local law enforcement talking for five minutes with student-athletes, before or after practice, about responsible decision-making, leadership and encouraging those in their peer group to live a drug-free lifestyle.

The 5 Minutes for Life presentations may also include testimonials from those directly impacted by drug addiction. This new educational campaign aims to reduce, and ultimately eliminate, illegal drug use among high school students and other young adults.

“Being in high school, you are around (drugs and alcohol) more than anyone,” Robirds said. “Where we are, where we live, we have a drug problem.”

Drug abuse has replaced automobile accidents as the No. 1 cause of death in the United States, Robirds said, and as laws being implemented make prescription medication more difficult to obtain, addicts are starting to use heroin and methamphetamines.

The newest trend among users, Robirds said, is a synthetic methamphetamine called “Alpha.” The drug is so potent users and dealers handle it with latex gloves because its active ingredients can enter the bloodstream through one’s skin and cause sickness and even overdose.

“People (police) encounter who are on Alpha are totally out of it,” Robirds said. “Staying away from drugs is the best way to prevent addiction 100 percent.”

Seniors Brook Blakeman and Leslie Mulkey were named ambassadors and are encouraged to use social media to promote the program’s key concepts and post video messages to Facebook and Twitter sites operated by the OSHP.

“A little bit goes a long way,” Robirds said. “The same goes for alcohol. Too much of it, too much of anything, is a bad thing.”

The campaign, which began in the fall of 2013, also involves the Ohio High School Athletic Association and the Ohio Department of Public Safety. The statewide partnership involves all 58 Patrol Posts, more than 800 OHSAA-member high schools and Ohio National Guard Service members from around the state.

Officers from OSHP will eventually speak to athletes at all Lawrence County high schools.

Farmers donate produce for special Saturday event special  At the Ironton Farmers Market this Saturday Ironton In Bloom will give away... read more