Fighting Tigers to face another tough opponent in St. Charles 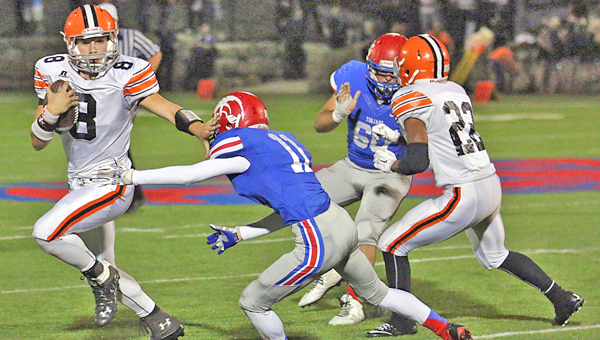 The Cardinals are 2-4 — a win over the Columbus Crusaders does not count in the OHSAA computer ratings — but Vass said those numbers don’t tell the whole story.

“They’ve played a really tough schedule,” said Vass. “Except for the DeSales game, they’ve played pretty well even in the games they’ve lost.”

In the 24-21 loss to Hartley, the game was tied after the first quarter but the Cardinals lost two fumbles and ran only four plays in the second quarter.

St. Charles won last year’s meeting 38-14 with the aid of a couple of fourth quarter scores and went on to post wins over Columbus Watterson and St. Francis DeSales for the first time in more than 30 years.

The Cardinals finished 8-3 and advanced to the Division II regional semifinals before losing to unbeaten Zanesville.

All three are seniors and returning starters.

“Bell has good speed and he can run. He hurt us last year,” said Vass. “Their quarterback can run or throw and he’s a big kid. Nowell is a hard runner. You can’t just arm tackle him. They’ve got a lot of good skilled players besides them, too.”

The offensive line is anchored by senior center Kit MacDonald (5-9, 215).

The linebackers are Delaney and sophomore Kevin Leary (6-2, 165) with Nowell a possible candidate in a 5-3 alignment.

The secondary is led by senior Jimmy Holtz (5-8, 145) who is the son of Ironton St. Joseph graduate Billy Holtz.

Bengals regroup after loss to Pats

CINCINNATI (AP) — Safety Reggie Nelson overheard a Bengals teammate trying to provide some insight about how it all went... read more