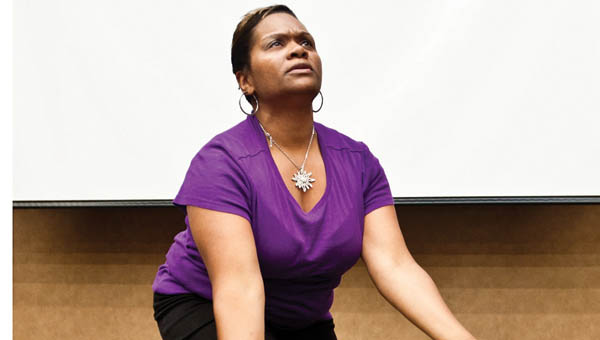 Domestic violence is not an act simply against women. Children are victims just as much as adults.

“Children are affected by this,” according to Tonia Moultry, training and technical assistant director of the Ohio Domestic Violence Network.

“We need to help children know what healthy relationships are,” Moultry said.

“And violence doesn’t end because parents are separated,” she said.

Children who witness violence can suffer from post-traumatic stress disorder and such illnesses as asthma, flu and gastrointestinal ailments.

When the child grows older, the impact can grow exponentially with a high-risk of suicide, running away and alcohol and drug abuse.

“It is a long-term impact,” she said. “Some kids are not going to come through OK.”

Tuesday’s program was the sixth annual event and again organized by the Lawrence County Domestic Violence Task Force. A variety of governmental and civic organizations honored the task force and its director Elaine Payne with proclamations and donations.

“Even though we are small, we are a very viable entity,” Payne told those assembled at the Bowman Auditorium on the campus of Ohio University Southern. “We try to instill in clients’ minds, they can become self-supportive.”

Ready to take a ‘sole trip’