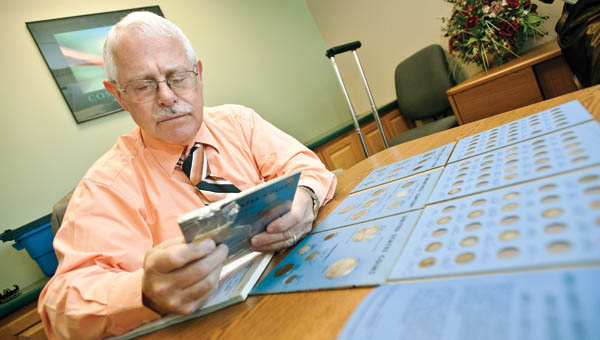 Rich Giedroyc with HCC Rare Coins, of Holland, reviews a collection brought in by area resident Charles Radar on Wednesday during a coin appraising event at WesBanco in Proctorville.

PROCTORVILLE — Rich Giedroyc took his jeweler’s loupe to examine the 1903 San Francisco Liberty dime with the intensity of Harry Winston checking one of his diamonds.

“I wish this didn’t have a hole there,” he told Charles Rader, who had come from Huntington, to get an appraisal from Giedroyc. “This is a better date.”

Twice a year Giedroyc from HCC Rare Coins from outside of Toledo comes to the Proctorville branch of WesBanco to give appraisals — and often buy — the coins brought to him from amateur collectors or those who just inherited some coins from Dad.

That was the case with Rader, who brought three albums of a variety of denominations.

“Let me take a better look at them,” he said.

Quickly Giedroyc moved back and forth from laptop where he checked values to his calculator, then jotting figures down on an inventory pad.

“This is very fine,” he told Rader about another coin. Another price went down on his sheet.

Giedroyc’s expertise comes from years in the profession and a lot of years as a collector himself.

“That is how most people in the business have begun,” he said. “They have some experience as a collector when young.”

“They make our coins look very unappealing,” he said.

After Giedroyc gave his appraisal of the coins, Rader pulled out an envelope of three $2 bills, all dated from the 1950s. Total value was $6.60 — the face value plus an extra 10 percent.

Rader sold the coins, but held onto the bills. Before he left, he asked the value of Barr bills.

Joseph Barr was the secretary of the treasury under President Lyndon Johnson for about a month. Because of the shortness of his term collectors thought dollar bills signed by him would be extremely valuable. However 400 million of them were printed, glutting the market and ending any chance for a high return.

“I knew of a woman who had about 400 in a safe deposit box,” Giedroyc said. “There were worth just their face value. Everyone thought they would be rare.”

Her investment ended up less than the annual fee on her box.

Pinnacle doctor back in court

The doctor of a former Ironton pain clinic made another appearance in Lawrence County Common Pleas Court, this time answering... read more