Vikings’ defense needs to step up vs. Tartans 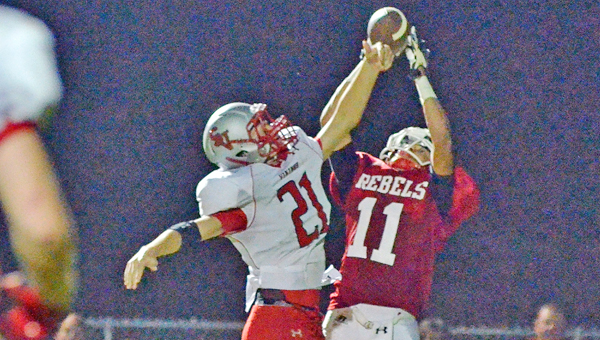 Symmes Valley Vikings’ defensive back Levin Cade (21) knocks a pass away from a South Gallia receiver during an earlier game this season. (Robert S. Stevens & The Gold Studio of Ironton)

Doesn’t sound good to an opponent.

A stingy defense with some speed and quickness.

Doesn’t sound good to an opponent.

Those are the sounds that will be heard when the Symmes Valley Vikings host the Sciotoville East Tartans on Friday in a key Southern Ohio Conference I game.

“We have to use technique and stay low. We have to swarm the ball and play disciplined defense,” said Vikings’ coach Rusty Webb.

“They changed their offense to a double wing (after losing 42-6 to South Point) and it’s the same offense as Northwest. They have a couple of better athletes than Northwest. Stiltner and Brown are pretty good,” said Webb.

Gerald — a junior — missed last week’s loss to Oak Hill due to the flu while Basham — a senior — was out with a staph infection.

Both are expected to play against the Vikings.

Symmes Valley and Sciotoville East both remain in playoff contention in Region 25 of Division VII and each have one loss in the SOC.

“This is a big game. We’re hoping to build off the momentum from the Green game,” Webb said of last week’s 42-0 win over Green.

Jim Walker jim.walker@irontontribune.com   In an era of spread offenses and high-scoring games, a good defense is even more vital.... read more