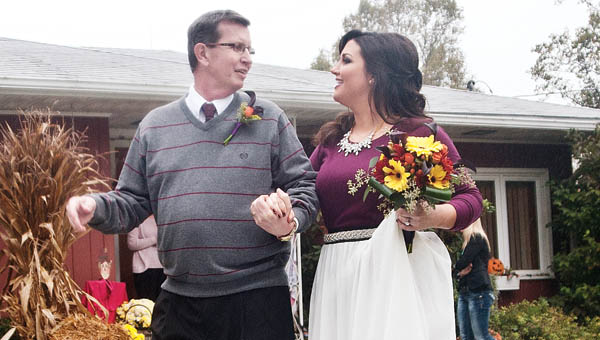 THE TRIBUNE/JESSICA ST JAMES
Casey Brislin is escorted by her father, Bob, during a giving-away ceremony.

Ceremony is daughter’s gift to father

He was there to kiss away the scrapes every time she fell. He was there to don that bulky red velvet suit and fluffy white beard to make sure she knew Santa Claus was real.

But Bob Brislin may not be there on one of his daughter’s most important days — her wedding day when in April she marries her fiancé, Joe Sark.

“Now my Dad can give me away,” she said.

During a break in Friday’s dreary downpours, Casey, in a maroon bodice and cream organza skirt, and her father with a red rose boutonnière pinned on his sweater walked down a white runner from house to a canopy of green bamboo in the front yard.

There at the canopy stood pastor Mike Huff who began the words of the wedding ceremony he has spoken countless times telling the guests that marriage is ordained and blessed by God.

Then Huff asked the age-old question, “Who gives away this bride?”

Brislin slowly reached for his daughter’s hand to slip it into that of Sark and stepped back to watch, with his wife, Terri, his daughter standing before their minister with the man she will marry this spring. It was a small look at what he may never get to see — his baby girl getting married.

Then Brislin and Casey, followed by their guests, went back into the house to share the traditional father-daughter dance to the tune of “Butterfly Kisses.”

Slowly the pair stepped back and forth to the music, at times laughing, at times just holding on tightly while the wedding guests fought back tears.

Three years ago the 58-year-old Brislin was diagnosed with glioblastoma – a fancy name for a terrifying disease, brain cancer.

“He had chemo, radiation and a clinical trial drug,” Casey said.

Surgery and gamma and cyber knife treatments were part of the regimen. It looked as if they were working. Brislin went into remission. In July of this year he had reached the three-year mark, so rare for those with his kind of cancer that only 5 percent make that.

“He was doing very well and we were not going to rush the wedding plans,” Casey said.

Then symptoms came back and now doctors say Brislin may have about three months.

That is a reality both father and daughter are facing with an appreciation of the special bond they have always had.

“He was always very giving,” Casey said. “We never went without. He always pushed me to do my very best.”

Like the time, with Brislin’s encouragement, Casey got on the honor roll for all four report cards.

“He hired a stretch limo for me and my friends and took us to Pizza Hut,” she said. “And he always dressed up as Santa Claus. He’d go down to the garage and change into the Santa suit. He’d tell me he was going down to feed the reindeer while Santa Claus comes in.”

It was Brislin’s support and encouragement that enabled Casey to get into law school at Capital University, pass the bar and start practicing with Randall Lambert’s law firm.

“He always thought I should be an attorney,” she said. “I could argue well.”

As father and daughter were walking down the aisle, the wedding photographers videotaped the ceremony for more than just memories’ sake.

In April, when Casey marries at the Ashland boat ramp, she will walk down that aisle part of the way escorted. Then she will take the last steps to the altar by herself, with the video of Brislin playing behind her.

“Through everything he has always been OK with it,” Casey said. “He told me ‘If this is what God wants, that’s fine. If he wants to heal me, that’s fine. If not, I’ll wait for you in heaven.’”

Fall foliage about to reach peak

CLEVELAND (AP) — Autumn colors are expected to approach their peak throughout Ohio in the next few weeks. Casey Burdick,... read more