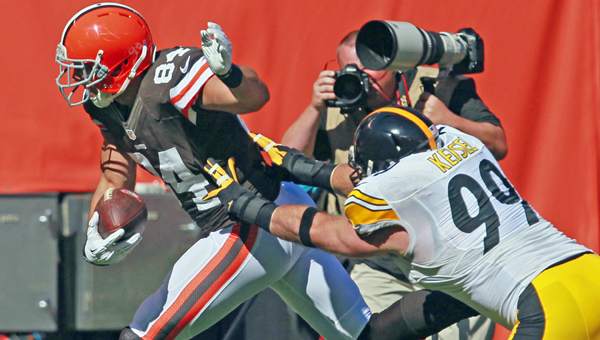 Cleveland Browns tight end Jordan Cameron is knocked out of bounds by Pittsburgh Steelers defensive end Brett Keisel after catching a pass from quarterback Brian Hoyer for a 42-yard gain during the first quarter on Sunday. (MCT Direct Photo)

CLEVELAND (AP) — Joe Thomas fought back tears. While center Alex Mack, his good buddy and fellow offensive lineman, was carted off the field with a broken leg, Thomas was overcome with emotion.

Later, the Pro Bowl tackle stood at his locker, his voice cracking for a very different reason.

For Thomas, this win meant more than any other.

The Browns had finally beaten the Pittsburgh Steelers — badly.

“It was special,” Thomas said following Cleveland’s 31-10 rout on Sunday. “I’ve been on the other end of this rivalry when we lose by three scores so many times. I’ve been through the hell of getting our butts kicked. It felt really good to finally be on the other end of it. It was a family win.”

Brian Hoyer passed for 217 yards and pulled off a rarity for a Cleveland quarterback, leading the Browns to a romp over Ben Roethlisberger and their biggest rivals.

Hoyer threw a 51-yard touchdown pass to Jordan Cameron and improved to 6-2 as Cleveland’s starter as the surprising Browns (3-2) beat the Steelers for just the third time in 23 games. Cleveland hadn’t beaten Pittsburgh so soundly since a 51-0 shutout in 1989.

Hoyer, the hometown kid quickly turning into a hero, ran off the field to loud cheers and exited near a banner that read: “This Is Hoyer Country.”

And it’s only growing.

“I think the last time the Browns beat the Steelers, I was the backup quarterback for the Steelers that day,” said Hoyer, referring to Cleveland’s win on Nov. 25, 2012.

Ben Tate had two rushing TDs and rookie Isaiah Crowell added another as the Browns opened a 21-3 lead in the first half and rolled to the easy win one week after staging the largest comeback in NFL history by a road team.

Roethlisberger suffered just his second loss in 20 games against Cleveland. The Steelers (3-3) never found a rhythm on offense and their defense, missing two starters, gave up too many big plays.

“We failed in all three phases,” coach Mike Tomlin said. “We got to play better. We got to swallow this one and we will.”

The victory legitimizes the Browns’ turnaround and Hoyer as the team’s unquestioned leader. There were some doubts about Hoyer when the season began, and with rookie Johnny Manziel on the roster, it was assumed Cleveland would eventually undergo yet another change at quarterback.

Hoyer has put that talk to rest and made the dramatic Browns, whose first four games were decided by eight points, one of the league’s unexpected winners.

He finished 8 of 17 and still has just one interception in 149 attempts.

“It was a little boring out there for me at the end,” Hoyer joked.

Roethlisberger wasn’t as efficient as he usually is against Cleveland. He went 21 of 42 for 228 yards and one late TD, was sacked twice and threw one pick against Cleveland’s maligned defense. It was his first loss to the Browns since Dec. 10, 2009.

Really, it was over long before that.

Cleveland led by 18 at halftime, a 180-degree switch from Week 1 when the Steelers built a 27-3 lead and gave up 24 unanswered points before winning on a last-second field goal.

The Browns rammed the ball down Pittsburgh’s throat to take a commanding lead late in the second quarter.

Tate’s 8-yard TD run capped an 85-yard drive soured by the loss of Mack, who got his legs tangled in a pile of players on a running play. He laid face-down in the grass for several minutes before several Steelers — and all of his teammates — came over to console him. Mack, who signed a five-year, $42 million contract in March, gave the crowd a thumbs up as he was driven off.

Mack had played 5,189 consecutive snaps without missing a play, anchoring an offensive line that has played well this season.

Seeing Mack leave was a huge blow for Thomas.

“We have played every snap together for six years and you are finally getting the best of Pittsburgh, he deserved to be out there with us,” Thomas said. “It was hard to go on. It’s so difficult to lose such a tremendous player like that.”

Right guard John Greco, who had never played center during a game in his career, slid over and took Mack’s spot, and Paul McQuistan came off the bench. The Browns barely missed a beat without Mack.

Coach Mike Pettine has a team united in purpose.

NOTES: Browns DE Armonty Bryant departed with a knee injury and Pettine said “the news is not good on Armonty.” … Over the past six quarters, the Browns have outscored their opponents 50-10. … Thomas has played 7,242 consecutive snaps, not missing a single play since he was drafted in 2007.

CINCINNATI (AP) — Cam Newton re-emerged as dual-threat danger. Andy Dalton missed on only one pass in overtime — a... read more