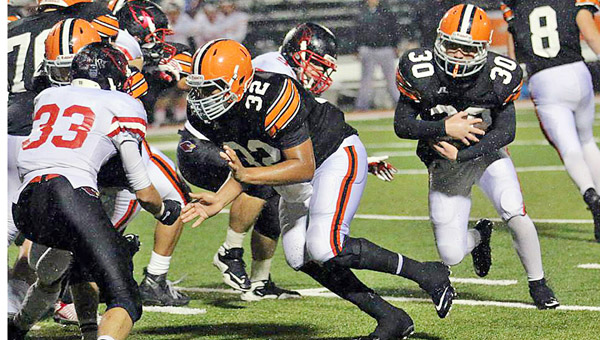 The Meigs Marauders are like a time bomb. Their offense can go off at any time and when it does, it can cause a lot of destruction.

The high-powered Meigs’ offense will be a tough test for the Ironton offense when the Fighting Tigers play host on Friday.

“They can put some points on the board. They’ve got some good skilled players and a good line. We know we have to be on top of our game if we want to beat them.”

Meigs comes into the game 3-4 with wins over Vinton County, River Valley and the wild, free-scoring 79-69 win over Fairland.

The 49 points were the lowest output this season by Athens.

The Marauders were plagued early by a key injury to sophomore quarterback Cody Bartrum (6-0, 180) who was hurt in the Coal Grove game with Meigs leading 13-12 at the half.

With Bartrum out, Meigs was guilty of four second-half turnovers as the Hornets blew the game open.

Bartrum was 7 of 12 for 98 yards and scored a touchdown before his injury. He was 10 of 24 for 176 yards and an interception against Nelsonville-York and last week against unbeaten Athens he was just 5 of 19 for 101 yards and three interceptions.

Isaiah English caught five passes for 75 yards against Athens. English was forced to play quarterback when Bartrum was injured.

“They run out of a pro-I set but they also like the shotgun and to spread the field,” said Vass.

The Marauders will utilize a strong linebacking corps in a 5-3 defensive alignment. Phelps is the middle backer flanked by sophomore Trae Hood (5-10, 200) and Acree.

“They’re one of the better group of linebackers we’ve faced and they have some size in front of them who will be tough to block,” said Vass whose team is 5-1 after beating Columbus St. Charles 25-24 last week.

In the secondary are freshman Lane Cullums (6-0, 170) and Bartrum the corners and English the free safety.

Phelps is the placekicker and Bartrum the punter.

CINCINNATI (AP) — Vontaze Burfict’s ankle-twisting return to the field has added to his reputation for crossing the line and... read more