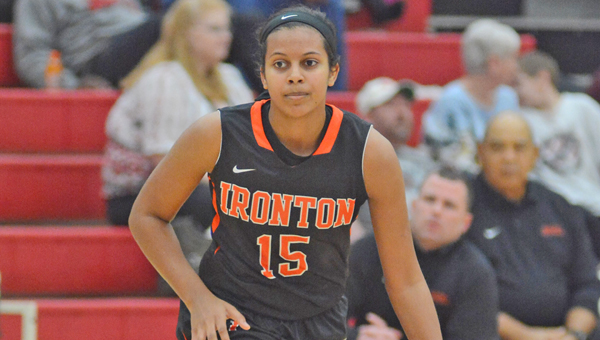 The dream is now a reality.

The Ironton Lady Fighting Tigers’ 5-foot-10 junior guard will realize her dream in a couple of years after giving a verbal commitment to play at Virginia Tech of the Atlantic Coast Conference.

“It means a lot. I’m surprised. I never thought when I was younger I’d be here. It was always my dream,” said Barrier.

Being just a junior and the commitment only verbal, Barrier can change her mind.

“You never know, but I don’t think so,” said Barrier.

Virginia Tech was one of many suitors. Included in the recruiting process were Dayton, James Madison, Middle Tennessee, Marshall and Cincinnati. She also had some interest from Florida, Purdue, Kansas State, Colorado, UNC-Charlotte and Belmont.

“I love having the chance of playing in the ACC and the challenge. I love the coaches. They’re real cool people. It’s far away from home, but not too far. It’s far enough to get away but not too far too come home. My mom loves it.”

Barrier said the commitment to Virginia Tech should help her performance over the next two seasons at Ironton.

“For the most part it takes a ton of pressure off. You still want to play and impress the coaches, but you don’t have the feeling that it’s going to affect you if you play one or two bad games,” said Barrier.

“Lexie is what you’re looking for in a player. She’s a good student, she’s a hard worker and she’s a team player. She’s worked hard for this and she deserves the opportunity,” said Graham.

With the goal of college basketball secured, Barrier is setting her sights on other goals.

“I want our seniors to make a run in the tournament. I feel like we can if we work for it. We have the potential to do,” she said.

Barrier credits her mother, Rachel Meadows, for introducing her to the game of basketball.

“I started playing at the age of four. I don’t know what made my mom put me in the little league program at the (YMCA). I’ve loved it ever since,” said Barrier.

“I love basketball. I just love the traveling and meeting new people. And I like the bonds with my teammates.”

Some computer questions may get answered this week