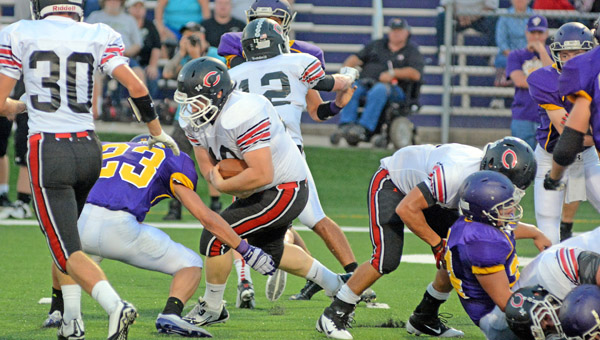 Coal Grove Hornets’ fullback Tanner Murphy (40) is one of the many weapons that will go up against the Chesapeake Panthers on Friday in an OVC showdown. (Kent Sanborn of Southern Ohio Sports Photos.com)

Every time there’s a showdown for first place in the Ohio Valley Conference, it always seems to include the Coal Grove Hornets.

The Hornets will play at Chesapeake on Friday in what could very well decide the OVC football championship.

Chesapeake can clinch at least a tie for the league title with a win and enhance their playoff chances.

The Hornets were league champs two years ago and runners-up last season. They also need to win their final three games to have a chance at the playoffs.

The Panthers beat the Hornets in the season finale in 2010 to win the league title. Coal Grove reversed a similar situation the following season to win the conference.

Coal Grove traditionally relies on its running game and this season is no different. The backfield has plenty of options that include Isaiah Gunther, Tanner Murphy, Austin Ruggles, Tanner Dolen and Daniel Rutherford.

“They have depth. They can run Murphy, Ruggles, Gunther, Rutherford, Dolen. They have a bunch of guys to go to,” said Panthers’ coach Andy Clark.

“They have the size avantage up front with players like (Austen) Pleasants and (Ike) Pennington. They like to put Pleasants in the backfield and use him as a lead blocker. That’s quite a weapon to have at your disposal.”

The Panthers are hoping to have quarterback Casey McComas back. He was hurt in last week’s win over South Point during the second series of the game and did not return.

Fairland at Rock Hill KEY: Rock Hill will have to control the clock and keep the ball out of the... read more