Buckeyes don’t miss a beat with Barrett at QB 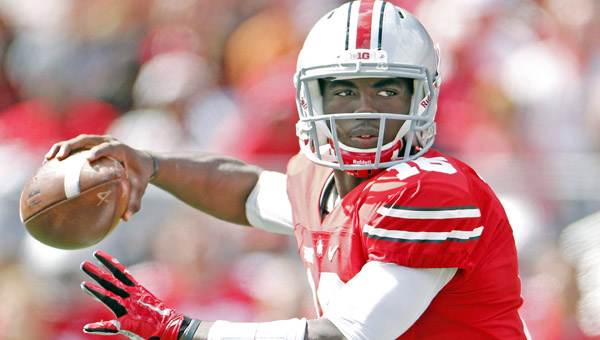 COLUMBUS (AP) — It didn’t take long for J.T. Barrett to realize that things would never be the same for him.

“Life has definitely changed,” said the redshirt freshman thrust into Ohio State’s starting quarterback job before the season when Braxton Miller underwent shoulder surgery. “The first day of classes, the teacher calls your name to see if you’re here and everybody turns and looks back, like, ‘J.T.’s in class?”’

Get used to it, kid. Every student seems to know — or wants to know — the guy running the Buckeyes’ offense. Most don’t know the name of the governor of Ohio, but they know who’s under center on Saturdays.

As he walks across campus to and from classes, Barrett encounters plenty of students who greet him as if they grew up together.

He has been very, very special so far on the field, that’s for certain.

The native Texan leads the Big Ten and is 15th in the Football Bowl Subdivision in total offense (326 yards a game) and tops the conference with 271 passing yards per game.

Over just the past three games since the Buckeyes were drubbed 35-21 at home by Virginia Tech, he’s put up video-game numbers: 14 touchdown passes, 1 interception, 909 passing yards and a 75 percent completion rate.

Miller, a three-year starter and two-time Big Ten offensive player of the year, did things that made highlight reels. Barrett just produces.

With Barrett — his full name is Joe Thomas Barrett IV — in charge, the Buckeyes racked up a school-record 45 first downs in a 50-28 rout of Cincinnati, tying the NCAA record.

A year ago after five games, unbeaten and third-ranked Ohio State was averaging 48.2 points a game and Miller and backup Kenny Guiton (spectacular in relief of an injured Miller in three games) had combined to complete 99 of 144 passes (69 percent) for 19 touchdowns and 1,070 yards with three interceptions.

“Where he’s at is a good place, with still a lot of room for improvement,” he said.

Ohio State hasn’t needed Barrett to carry the load. Ezekiel Elliott has been a solid option at tailback, while receivers Michael Thomas, Dontre Wilson and Devin Smith have all been dependable. Perhaps most importantly, an offensive line with 80 percent new starters has provided a heat shield.

His teammates rave about Barrett’s calm in the huddle. But before a recent game, he stepped forward in the locker room and gave an impassioned speech. Many had never seen him speak up like that.

Before the season began, Meyer saw such fire burning in Barrett.

On Saturday, the Buckeyes (4-1, 1-0 Big Ten) entertain Rutgers (5-1, 1-1), which is third in the nation in sacks. It’ll be yet another challenge for the youngster under center.

For his part, Barrett says he has never been overwhelmed since taking over for Miller, nor has he reflected on what he’s accomplished.

“I don’t think I have too much time to think about that,” he said. “I just try to get better each week, make sure I have my guys on offense ready to play, make sure everybody knows what’s happening and what they’re supposed to do.”

Inevitably, Meyer will face a difficult decision. Miller now has his throwing arm out of a sling. He says he plans to return to the Buckeyes next spring for his final season of eligibility after graduating in December.

So, if and when Miller returns, who’s the starter?

“Braxton is our quarterback. To be fair to Braxton, (he’s a two-time) Big Ten player of the year,” Meyer said.