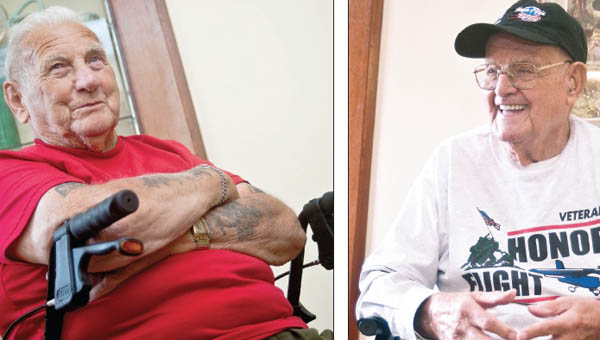 The Honor Flight Network was created to honor veterans by providing an opportunity to visit their memorials in Washington, D.C. This past weekend two local World War II veterans made the one-day trip to our nation’s capital.

Horace McHone, 88, and Bud Turner, 96, both of Close to Home assisted living facility in Ironton, were selected by the Honor Flight Network to fly from Columbus to Baltimore, and then taken by bus to the World War II and other war memorials in Washington, D.C.

Rachel Stevens, who works at Close to Home, said her sister-in-law’s grandfather was selected for an Honor Flight and it prompted her to submit the online application for McHone and Turner.

“We were treated like kings,” McHone, who served in the U.S. Navy aboard the U.S.S. Duchess, said. “It was my first time ever on a jet. (The trip) was good. I’ve never really done anything like that.”

McHone admits his memory of his time fighting in World War II is foggy. What he is unsure of is whether it’s because of his age or a choice he made nearly 70 years ago.

“When I came home in 1946, I threw my uniform and everything away,” he said. “I never really thought much more about it. I went to war when I was 17. I was still so young when I got back I just didn’t want to keep it. Now I wish I would’ve kept something.”

Honor Flight is provided at no costs to veterans. McHone and Turner were driven to Columbus, then flown to Baltimore, Maryland, then taken by bus to Washington, D.C., where they spent the entire day visiting memorials and other sites. Each veteran on the flight had a personal aid.

“Before this trip I had only heard about the things in Washington, D.C.,” McHone said. “I really didn’t know what to expect from the trip and I don’t think I would have gone if Bud didn’t go. It’s the only thing I have gotten to do in years. When people saw us they went hog wild, clapping and shaking our hands. It was nice. It’s just been so long since the war I can’t hardly remember any of it.”

Turner served in the U.S. Air Force and was stationed in England from 1942-1946. His son took him to Washington, D.C., years ago but going with fellow veterans to see the World War II Memorial was an experience he said he would never forget.

“It couldn’t have been much better,” Turner said. “The way we were treated and what they did, it was excellent.”

An Honor Flight from Huntington is scheduled for next May. Applications can be submitted online at www.honorflight.org. Top priority is given to the senior veterans, World War II survivors and veterans who are terminally ill.

Mayor: ‘This is crucial’

Special meeting offers information about flood levy To clear up any confusion and allow residents to ask questions was the... read more