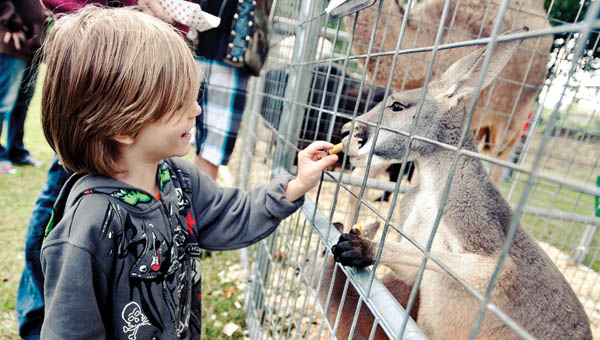 SOUTH POINT — It was cold and rainy on Saturday but Heritage and Fire Prevention Day was the type of event that transcended weather.

“It’s definitely fun,” Bekki Bowen, of Huntington, said. “Anything in town, in such a tight-knit community that’s free is going to draw a lot of people. I think this is great.”

Olivia Taylor, Bowen’s daughter and a seventh-grader at South Point Middle School, agreed with her mother and added some other incentives.

“There’s lots of stuff to do here so it doesn’t get boring,” she said. “My friends are here, too, and I get to hang out with them.”

Heritage Day, sponsored by the volunteers of People for the Point, is the fall incarnation of the civic group’s successful Party in the Park event that took place this past July.

“Both (Party in the Park and Heritage Day) were more successful than any of us expected,” Drew Gibson, member of People for the Point, said. “We are optimistic that we will do this event again next year.”

A 10 a.m. parade was the official start of Heritage Day, after which people moved to the park for live music, inflatables, vendors, food, a petting zoo with kangaroos, a camel, yaks, an alpaca and goats, and pony rides.

“The weather may have held people back a little but overall it’s going all right,” Gibson said. “We just want people to come out, have a good time and enjoy themselves without it costing anything. (The People for the Point) raises money all to put on events like this and give back to the community. We all do our equal parts to ensure these events take place and everything goes smoothly.”

The event concluded with a zombie 5K run/walk sponsored by the South Point Fire Department.

The goal for this year’s fourth annual Lawrence County Bicycle Giveaway is giving 350 to kids in the community for... read more