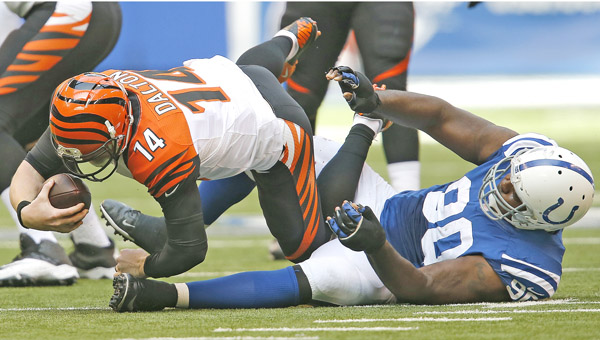 Indianapolis’ defense was just too much.

Nothing went right for the Bengals in a 27-0 loss to the Colts, who got two touchdown passes from Andrew Luck and a rushing TD from Ahmad Bradshaw on Sunday.

The Bengals had 135 total yards, matched a franchise record with 11 punts, and were shutout for the first time since the final regular-season game of the 2009 season.

“It felt like early on, we just needed to get a first down,” Dalton said. “We kept getting stopped. You pile that on, not getting first downs, getting third-and-longs, you’re going to get stalled a lot. You put all that together, and you get a game like we had today.”

Dalton finished 18 of 38 for 126 yards. Giovanni Bernard carried seven times for 17 yards. Jermaine Gresham accounted for more than one-third of the Bengals’ total yards with 10 catches for 48 yards.

The Bengals (3-2-1), who were without receiver A.J. Green for the second straight game, had only two first downs in the first half and converted only one third down.

“Things were disappointing,” Cincinnati coach Marvin Lewis said. “Not having execution on third down offensively, to not make first downs and not make opportunities to keep the drives alive, and then have a couple plays on defense where we didn’t play very well.”

The Bengals played without three starting linebackers for much of the game. Emmanuel Lamur and Rey Maualuga were on the inactive list with injuries and Vontaze Burfict left the game early with a cervical sprain.

Over the previous four weeks, all wins, Indy (5-2) had forced eight turnovers, got 16 sacks and limited opponents to 18.8 points. This week, Indianapolis’ defense was every bit as good:

—Dalton was sacked three times Sunday compared with a league-low two in the previous five games.

—And when the Colts needed a fourth-quarter red-zone stop to preserve the shutout, they got that, too.

The Bengals ran just eight plays in Colts territory and never had a chance after Dwayne Allen’s brilliant 32-yard catch-and-run made it 17-0.

Indy did all that with Robert Mathis, the 2013 NFL sacks leader, relegated to waving a towel; starting defensive tackle Arthur Jones inactive; and starting linebacker Erik Walden ejected late in the first half for making contact with umpire Bruce Stritesky.

Luck, who finished 27 of 42 and posted his sixth 300-yard game of the season, enjoyed every minute.

“I’m just like a fan watching the game, I might as well just be a fan when our defense is out there,” he said.

Luck wasn’t the only one applauding Indy’s breakout performance.

With his six-game suspension over, Jim Irsay returned to the owner’s suite for the first time since the preseason. After three years of preaching about the need to have a balanced offense and stingy defense, Irsay and each defensive player received a game ball.

It was Indy’s first shutout since beating Tennessee in the final game of the 2008 season.

T.Y. Hilton finished with seven catches for 107 yards, his second straight 100-yard game. Reggie Wayne caught four passes for 15 yards to give him 14,000 yards. He’s the ninth NFL player in that club. Bradshaw scored twice, including his first TD rushing of the season. In all, the Colts had 506 total yards.

Luck didn’t have to do much. He led Indy on two 68-yard drives in the first half, capping one with Adam Vinatieri’s 23-yard field goal and the other with Bradshaw’s 1-yard TD run to make it 10-0.

In the second half, Luck closed the first 85-yard drive with a late throw to Allen, who barely caught the ball on his fingertips, then turned upfield and tight-roped the sideline for the score. Luck sealed it with a 10-yard pass to Bradshaw that the officials originally ruled down just outside the goal line before reversing the call to give Indy a 24-0 lead.

The defense took care of the rest.

NOTES: The teams were a combined 0 for 14 on third-down conversions in the first half, marking the first time that’s happened in the same game since Cincinnati and Jacksonville did it Sept. 30, 2012, according to STATS. … Bengals cornerback Leon Hall (strained lower back) left the game early. … Colts running back Trent Richardson was pulled early with a hamstring injury.