Fighting Tigers use balanced offense to roll past Meigs 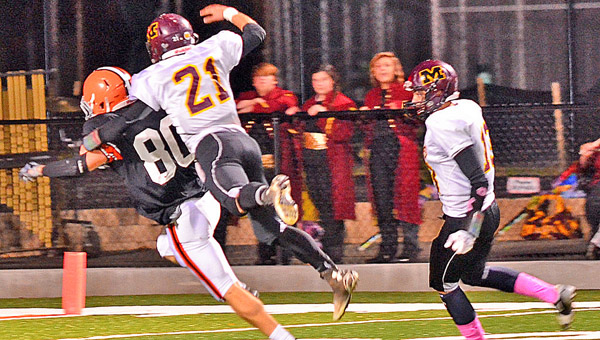 Ironton Fighting Tigers’ senior end Joe Bowling (80) makes the catch on a 51-yard pass play as he beats Meigs’ defensive back Michael Davis. Bowling’s catch went to the 5-yard line and set up an Ironton touchdown in a 41-18 rout on Friday. (Tony Shotsky of Southern Ohio Sports Photos)

The game plan was simple. Stack the box, stop the run and make Ironton throw the ball.

Sounds good to the Meigs Marauders. Sounded even better to the Ironton Fighting Tigers.

Ironton not only went to the air but continued to run the ball as they racked up 473 total yards en route to a 41-18 win over Meigs on Friday.

Ironton ran for 273 yards led by D’Angelo Palladino with 130 yards on 13 carries and two touchdowns. He now has 1,106 yards on the season in just seven games and is averaging 8.4 yards a carry.

But the running game wasn’t the only thing working as quarterback Tristan Cox hit 7 of 12 passes for 200 yards and a score.

“Our bread and butter is to run the ball. That’s no secret. But Cox is a good athlete and he can throw the ball,” said Ironton coach Mark Vass.

“We’ve got some guys who can catch it so we’re not afraid to put the ball in the air if we feel the need. They were putting nine and 10 guys in the box to stop the run.”

Ironton is now 6-1 and has won six straight regular season games for the first time since the 2004 season. They’ve clinched a playoff berth and need at least one win in the final two games to secure a home game.

Quarterback Cody Bartrum executed the Meigs’ short-range passing game as he hit 23 of 34 passes for 237 yards and three touchdowns.

However, he was intercepted twice and sacked seven times for a loss of 38 yards.

“We got good pressure up front from (Caleb) McKnight, (Isaac) Sherman, (Joe) Bowling and (Lucas) Campbell,” said Vass. “Meigs was content to throw nickel and dime passes and we just stayed with the game plan. We bent but didn’t give up the big play for the most part.”

Ty Phelps had eight catches for 95 yards and a score, Isaiah English nine receptions for 67 yards and Michael Davis four grabs for 81 yards and two TDs for Meigs (3-5).

After an exchange of punts, Ironton marched 64 yards in 11 plays with Andrew Barker running the final yard for the touchdown. Luke Kelley’s conversion kick made it 7-0.

Ironton extended the lead to 14-0 on a 1-yard run by Palladino with 9:58 left in the first half. The score was set up by a 51-yard pass to Bowling from Cox.

Palladino had a 71-yard touchdown reception called back on a holding penalty in the second quarter.

Ironton was then forced to punt and Meigs had the ball at the 43.

A tipped pass was caught off the deflection by Davis for a 12-yard gain on a third down that kept a Meigs’ drive alive.

Seven plays later Bartrum hit Davis running over the middle and who took it the rest of the way for the score and it was 14-6 at the half.

Palladino bolted 66 yards for a touchdown on the first play of the second half and it was 21-6.

The Marauders failed to convert a fourth down despite a 15-yard penalty on Ironton that put the ball at the Fighting Tigers’ 23.

Ironton was called for holding on first down, but the Fighting Tigers recovered and scored seven plays later on a 55-yard pass from Cox to Hunter Weber and it was 28-6.

“I saw some things in their coverage a few pervious plays and I told Cox I was going to make a cut. Tristan saw it and made the right read and go me the ball I give all the credit to him,” said Weber.

A 30-yard end around run by English got the ball to the Ironton 18 and Bartrum hit Phelps two plays later with a 14-yard scoring pass and it was 28-12.

But Ironton answered with a 63-yard, 7-play drive capped by Desmond Young’s 1-yard plunge with four seconds on the clock and it was 35-12.

Tanner Price had a 20-yard run and Palladino a 19-yard carry to highlight the march.

An interception by defensive end Bowling gave Ironton the ball at the Meigs’ 43. A 33-yard pass to Price got the ball to the 2-yard line where Young had his second 1-yard touchdown run and it was 41-12 with 5:43 to play.

Meigs managed a 39-yard scoring pass to Davis with 2:58 left against many of Ironton’s backups to cap the scoring.

Ironton was its own worst enemy with 10 penalties for 103 yards.