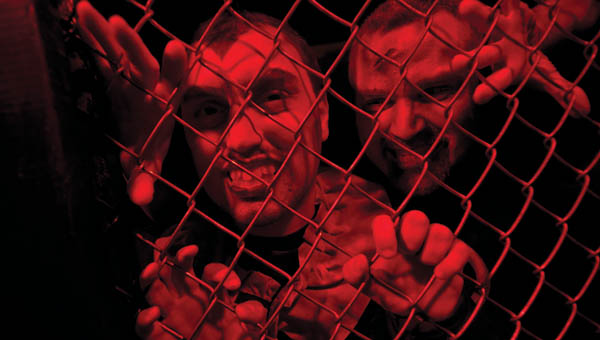 Steve Cahal, right, joins his son Aaron in the insane asylum while volunteering at the Haunted Tunnel Saturday evening.

As the line of people waiting to traverse the Ironton Lions Club’s Haunted Tunnel on Saturday, Steve Cahal and his son, Aaron, stood just outside the entrance.

Steve was made up like a zombie complete with a blood-oozing gash on his forehead. Aaron was the quintessential Dracula-esque vampire. Both men were transformed by local makeup artist Eric Swan. But scaring people, Steve said, is only part of their reason for being there.

Aaron, a 2013 graduate of Open Door School, has autism. Even with limited verbal abilities Aaron strongly conveyed the message to his father he wanted to be a part of the Haunted Tunnel.

“He’s wanted to get involved with the tunnel in some way for a while,” Steve said. “His ultimate goal was to be inside the tunnel scaring people.”

On Saturday Aaron was just a few minutes away from achieving that goal.

“I wanted to teach him about the importance of volunteering,” Steve said. “And although he’s autistic I wanted to show him and other people that just because someone has a disability it doesn’t mean they can’t accomplish goals.”

Autism statistics from the U.S. Centers for Disease Control and Prevention (CDC) identify around 1 in 68 American children as on the autism spectrum — a tenfold increase in prevalence in 40 years. Research shows the increase is only partly explained by improved diagnosis and awareness. Studies also show that autism is four to five times more common among boys than girls. An estimated 1 out of 42 boys and 1 in 189 girls are diagnosed with autism in the United States.

“He just started showing interest in the tunnel,” Steve said. “When he gets his mind set on something, it’s all he tends to think or care about. So, here we are.”

“One of the best things about all this is I didn’t do it all for him,” Steve said. “He did a bunch of it on his own.”

The Lions Club Haunted Tunnel opens at 7 p.m. every Friday and Saturday throughout October at the intersection of U.S. 52 and State Route 93 across from Ironton Hills Plaza. Admission is $5.

CLEVELAND (AP) — Two more people have been quarantined in northeast Ohio following the visit by a Dallas nurse who... read more