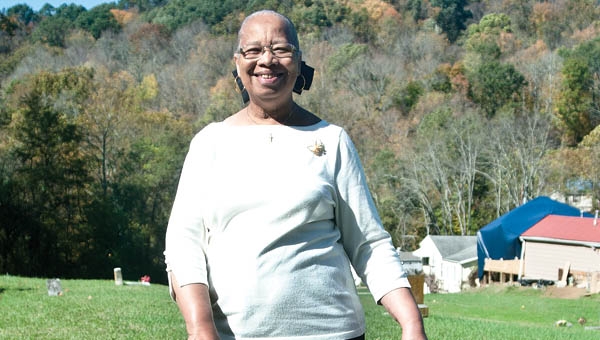 THE TRIBUNE/JESSICA ST JAMES
Susanne Howard stands by a memorial headstone in Mount Pisgah Cemtery located off of State Route 775 in Proctorville. Howard has been recognized for her restoration work of the cemetery.

ROME TOWNSHIP — A black granite memorial headstone is the first thing most visitors see when arriving at Mt. Pisgah Cemetery on County Road 775 outside Proctorville.

“It is engraved with the words: ‘To all those who have gone before us,’” Susanne Howard, member of the Mt. Pisgah Committee Inc., said. “It’s to honor everyone who is buried in that cemetery.”

The Mt. Pisgah Committee celebrated its 10th anniversary in September and its efforts have not gone unrecognized. The group recently received citations from the Ohio House and Senate. Howard received individual recognition from Sen. Bob Peterson.

“It’s an ongoing cleanup effort,” Howard said. “It was in such bad shape for so many years it couldn’t be recognized; many people didn’t even know it was there.”

The cemetery was established in 1899 and is across the street from the Apostolic Tabernacle, which was once the Mt. Pisgah Missionary Baptist Church. Many people on the committee had family members who attended the church.

“We went in and cut the trees and weeds that had overtaken the cemetery,” Howard said. “We fixed headstones that had fallen or been knocked over by people riding four-wheelers through it. Many of the living relatives of the people who are buried there have moved away and the graves weren’t kept up.”

One of the bigger projects of the committee is the placement of the cemetery’s black granite headstone in honor of those buried there. Every Memorial Day American flags are placed on veterans’ graves, three of who fought in the Civil War.

Fundraisers are the backbone of the committee’s operation. Donations have paid for proper lighting, tree removal, signage and the current project, re-installing the fence that once enclosed the cemetery.

“We are in the process of having it fenced in again,” Howard said. “We bought signs that told people not to dump trash there because they did that for years.”

Sen. Peterson (R-17) wrote in his citation to Howard that she is a “remarkable individual with selfless dedication” and her longstanding hard work demonstrates a “commitment to excellence.”

The committee has its annual cleanup at the cemetery on Oct. 25 and as in past years Proctorville Boy Scout Troop 38 will assist them in the effort.

Rep. Ryan Smith (R-93) wrote in his citation to the committee that its recognition is a “fitting tribute” and the committee has taken on an “exemplary endeavor.”

“It’s a wonderful anniversary,” Howard said. “We are senior citizens with relatives in that cemetery,” she said. “We really need to keep doing this.”

Courthouse to honor vets with photographic exhibit For the third year county commission administrator Tami Goody will put up the Wall of... read more