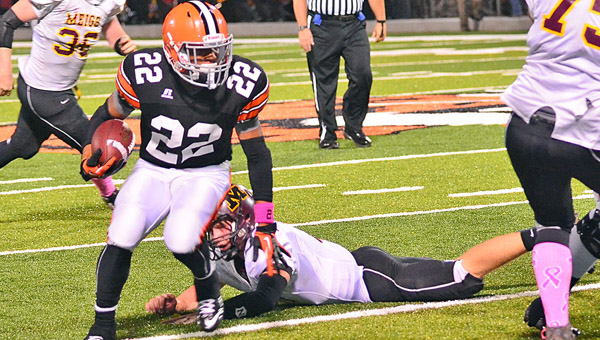 It will be power football at its best as the unbeaten Jackson Ironmen hosts the Ironton Fighting Tigers Friday.

Jackson has run past all eight opponents this season including a 27-0 win over the Wheelersburg Pirates, a team that beat Ironton 42-16 in week one.

The Ironmen are ranked No. 8 in the Associated Press poll and are sixth in Region 9 of Division III. They have trailed only once this season, 7-0 in the first quarter to Logan.

Gabe Griffiths (6-0, 192) suffered a shoulder separation and returned just three games ago. He has 16 carries for 132 yards.

“They can all carry the mail. They have a lot of formations and you can’t key on one guy,” said Vass.

“It’s hard to say one lineman is better than the other. They’re pretty good across the front, but Williams is really good,” said Vass.

Leach has 19 receptions for 350 yards and three touchdowns. Williams has seven grabs for 136 yards and a score.

Even though Jackson uses a power game on offense, the strength of the team might be its defense. The Ironmen have outscored their opponents 287 to 60.

In the win over Wheelersburg, Jackson had five stops on fourth down. Four were 5 yards or less, three were in the red zone and one was a goal line stand while leading 20-0 midway through the fourth quarter.

The Pirates were held to 113 yards rushing on 33 carries and quarterback Austin May was just 11 of 21 for 84 yards.

“All of their linebackers are pretty good,” said Vass.

Up front Jackson had Cooper at nose guard, Roseberry and senior Cossie Rawlins (5-9, 200) are the tackles with Williams — a Stanford commitment — at one end with junior Tre Barger (6-0, 221) and Bachtel sharing the other end job.

“They’re the real deal,” said Vass. “Their defense will be quite a challenge for us. They’re the best defense we’ve seen all year.”

Jackson’s kicking game is strong with Griffiths as the punter and Sheldon Moore the placekicker.

Jim Walker jim.walker@irontontribune.com   It looks like Brent Morgan has put two great rounds together once again. Only this time... read more