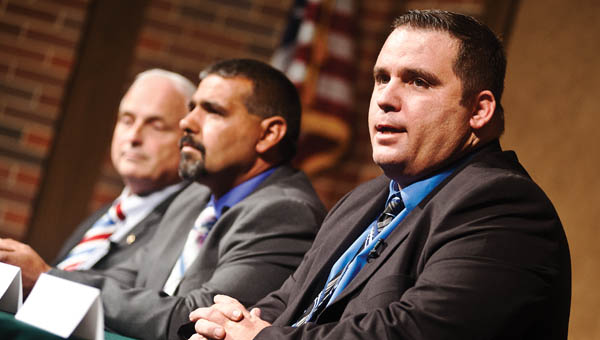 Do you like how things have been over the past years?

If so, you know how you should vote.

If not, you know how you should vote.

That was the message that came from the forum sponsored by the Chamber of Commerce at Ohio University Southern where candidates running for two state House races, one U.S. House race and the Lawrence County Commission promoted themselves and occasionally tangled with their opponents.

First up were the candidates running for state House seats: Incumbent Terry Johnson, a Republican, vying against Thomas Jefferson Davis, a Democrat, for the 90th District; and Josh Bailey, a Democrat for the 93rd District. Bailey’s opponent, incumbent Ryan Smith, had another commitment and did not attend the forum.

Johnson noted that the 90th is a large district, but that his goal has always been to stay close to the people.

“I promised I would stay in the district and be here for you,” Johnson said in his opening statement.

Davis, in his opening, criticized what he called the dynamic in Ohio politics.

“The working class resident is not represented,” he said. “Four years ago, the economy was in the tank. Cuts were made that could have been made to harm less of those struggling to get by.”

One of the reasons Bailey said he got into the race was what he called the “decline in our way of life.”

He faulted the state for having a $1.5 million budget surplus yet made cuts to local government.

“We need to raise our minimum wage,” Bailey said. “We don’t have buying power.”

Davis wants to focus on working with local leaders to address common issues, including crime, the drug problem, budgetary issues and infrastructure, especially in Ironton.

Johnson, however, cited his record and that of the state Republican leadership for curbing pill mills and changing the economic downturn.

“Keep doing what we are doing,” he said.

Bailey countered that the end of pill mills has simply sent drug users onto other substances such as heroin.

Johnson said he has brought his family values to the office, while Davis cited his connection with the people.

“Knowing where you come from,” Davis said. “The people of southern Ohio and the 90th will keep me grounded.”

The most sparing for the night came when incumbent U.S. Rep. Bill Johnson and his Democratic opponent Jennifer Garrison took the stage.

Repeatedly Garrison faulted Johnson’s record as one of the reasons for the gridlock in Washington.

“Because of all the bickering,” she said. “I am your choice for change. I have a history of achieving results. (Congress) is so dysfunctional, it can’t do its job. It hasn’t worked in a bipartisan manner.”

“Ninety-nine-point-five percent she voted with the party line, including a tax on Ohio coal,” he said.

Both said they supported the coal industry.

“There is absolutely a war on coal,” Johnson said. “The EPA is trying to put additional regulations on power plants. Ohio is still dependent on coal to provide 67 percent of its energy. This administration is trying to shut down the coal industry.”

“I have always supported coal,” she said. “The U.S. needs to be a leader in clean coal technology.”

Also on stage with Johnson and Garrison was Dennis Lambert, the Green Party candidate, who originally had not been invited to the forum as organizers did not realize he was also running for the seat.

His platform is to shrink government to reduce the tax burden and respect diversity.

“That has made America great,” he said.

One of the moments of greatest contention between the two main candidates came in their closing statements.

“Now is not the time for America to take a back seat in the leadership role,” Johnson said. “Go check my voting record. Don’t take Ms. Garrison’s or Mr. Lambert’s word.”

Garrison countered by saying a re-election is like a job evaluation.

The final debate pairing was between incumbent Republican Freddie Hayes Jr. and Democrat challenger Tim Edwards for a seat on the Lawrence County Commission.

Both men agreed the jail was the biggest issue facing the county.

“And I still don’t know how we are going to fund (moving the jail),” Edwards said. “People need to know what to expect.”

“I run on public safety and have given (the sheriff) more than he’s ever gotten,” Hayes said.

“It is a constant fight for the sheriff (with commission) to get what he wants,” Edwards countered.

Edwards followed the jail with jobs as the next biggest issue facing the county.

“We need some higher paying jobs,” he said.

“We have created over 400 jobs,” Hayes responded.

“I want to know what these jobs are,” Edwards said. “What is the training? Where do you get the applications? Let’s not just talk about it.”

“We have been conservative,” he said. “If you want to protect your home and your wallet, you vote for me. I am a voice for the people.”

“If you are happy, vote the same,” Edwards said. “The only way to get a different result, change the way you vote.”

SOUTH POINT — What started as a modest goal of $1,000 has more than doubled in size for a few... read more