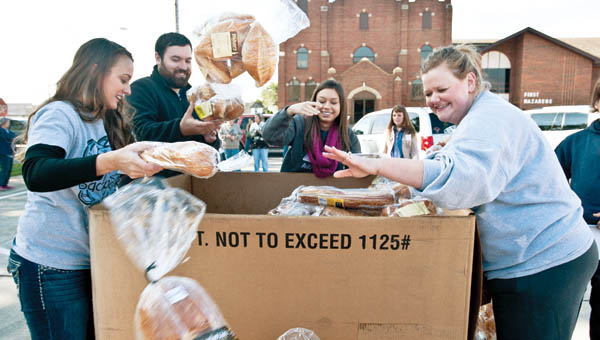 IRONTON TRIBUNE/JESSICA ST JAMES
Volunteers gather in front of Ironton’s First Nazarene Church, located on the corner of South Fourth and Pleasant streets, on Thursday to help with a mobile food pantry.

The mobile pantry of Huntington-based Facing Hunger Foodbank arrived in Lawrence County on Thursday to a crowd of waiting people.

“The counties we visit are determined by statistics that show the number of pantries compared to the number of people in poverty,” Sasha Hart, mobile pantry coordinator, said. “Some counties just have high poverty levels and Lawrence is one of those counties.”

Nearly 110 families totaling 359 individuals received 7,423 pounds of free perishable and non-perishable items such as bread, produce, eggs, meat, water and other beverages in the parking lot of the First Church of the Nazarene in Ironton. It’s a location Hart said was strategically picked.

“Where we have the mobile pantry really makes a difference,” Hart said. “Since we are here in the center of Ironton people can walk here and since it’s easily accessible there’s really no crowd to try and fight through so it works out well.”

Volunteers, Hart said, are important for the mobile pantry and roughly 20 volunteers from Campbell Chapel, First Church of the Nazarene, the foodbank and Huntington Law Firm Vital and Vital, helped during the giveaway.

Lawrence County is considered what Hart calls a “food desert” because of the lack of available food even with the presence of multiple food banks. Providing food is one aspect of the mobile pantry, but raising awareness is another.

“People drive by and see how many people take advantage of these pantries and how thankful people are and it really hits home,” Hart said. “People really are tickled with what they get.”

One woman who went through the line told Hart that what is being offered is “good stuff” and another said she was pleased it was just not “bags of chips and things like that.”

No matter the factors involved in making it difficult for families to buy food, Hart said, there should be no shame involved in getting free food when it is available.

“I see more mothers with their daughters and the daughter is holding her young daughter showing up,” Hart said. “Forty dollars worth of food they get there can go toward buying a winter coat or gloves or making sure the heat stays on in the winter. Sometimes when people see all the people in line it inspires them to start their own pantry or start volunteering. These events open people’s eyes to what’s going on in their own community.”

Another aspect that’s important, Hart said, is realizing that not all people in line for free food are there by any fault of their own.

“There’s a lot of grandparents raising their grandchildren on a fixed income,” she said. “Some people worked jobs that had no retirement or their medical benefits were taken away and they have to pay out of pocket. Sometimes this little bit of groceries is the high-five some people need to get back on their feet, too. Everybody needs help every now and then.”

CHARLES BURNS Police have arrested the man wanted in connection with an early morning stabbing in north Ironton. A felonious... read more