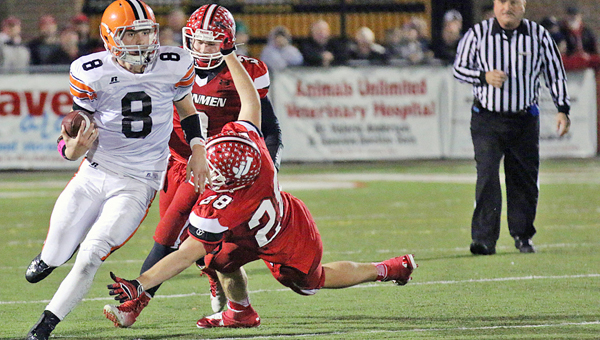 JACKSON — There was no Rocky miracle this time.

A heavy underdog, the Ironton Fighting Tigers went toe-to-toe with the unbeaten Division III Jackson Ironmen on Friday in what resembled a prizefight much like the old Rocky movies.

But this wasn’t Hollywood. There would be no heroic finish with the good guys riding off triumphantly into the end zone.

Instead, the size, strength and depth of Jackson — ranked No. 8 in the Associated Press poll — were too much to overcome as Ironton fell 33-21.

“It was a tough fight. We knew it would be,” said Ironton coach Mark Vass. “We said before the game they were the real deal. We knew they were big and strong up front and that would be a problem and it was.

“We hung in there and gave ourselves a chance, but we couldn’t come up with a key stop when were needed it.”

Despite the loss, Ironton is still in line for a home playoff game in Division V with a win at home next Friday against Raceland.

D’Angelo Palladino ran 12 times for 146 yards and scored two touchdowns, one on a punt return. Cox ran for 35 yards and Tanner Price had 34 yards on nine attempts.

Jackson was led by Derek Rafferty with 133 yards on 10 carries and two touchdowns. Gabe Griffiths ran seven times for 83 yards and two scores.

Quarterback Hunter Sexton had 43 yards on 10 tries and he was 4 of 6 passing for 74 yards including a touchdown and an interception.

A shanked punt that traveled just one yard set Jackson up at the Ironton 40-yard line for its first possession.

It took just five plays to score as Rafferty ran a yard with 6:20 left in the first quarter and it was 6-0. Sheldon Moore added the conversion.

Ironton used the punt for its first touchdown as Palladino returned a Jackson punt 49 yards for the score with 1:20 on the clock. Luke Kelley’s conversion kick tied the game.

The punt return was set up by a third down sack by Ironton’s Joe Bowling and Caleb McKnight that left Jackson at its own 9-yard line.

Jackson needed just five plays to regain the lead as Sexton hit Austin Leach with a 43-yard scoring strike and it was 14-7.

But Palladino answered on the first play following the kickoff by breaking three tackles and going 80 yards for the touchdown and getting a key downfield block from Cox. Kelley’s kick tied the game at 14.

Jackson got a pass interference penalty to start its next drive and a 35-yard run by Griffiths to the Ironton 1-yard line that set up Griffiths’ scoring plunge and it was 20-14 with 8:41 left in the half.

Jackson came out with its own quick score to start the third quarter as Rafferty went 55 yards on the second play to extend the lead to 27-14 one minute into the second half.

Ironton was pinned at the 9-yard line following a punt. The Fighting Tigers then marched 91 yards in 19 plays as they ate nine and half minutes off the clock to score on a 3-yard run by Desmond Young.

An outstanding catch by Bowling for 31 yards off a tipped ball and a 14-yard scramble by Cox kept the drive alive, and then a spinning 12-yard run by Palladino set up the scoring run. Kelley’s kick made it 27-21.

Bowling had three catches for 59 yards.

But Jackson was quick to respond by going 65 yards in only five plays capped by Griffiths 4-yard run with 6:50 to play and it was 33-21.

Jim Walker jim.walker@irontontribune.com   COAL GROVE — One goal down, another on the horizon. The Coal Grove Hornets clinched at... read more