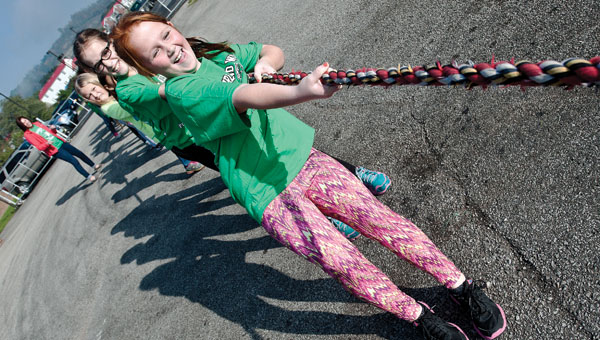 ROME TOWNSHIP — It was the boys versus the girls and the girls put their all into Friday’s tug of war and more than held their own.

“Spread out and don’t step on each other,” one of parent volunteers called out as the students lined up on each side of the rope to see who could pull the hardest.

That’s because at Fairland West Elementary it was Fun Fitness Friday and the third, fourth and fifth graders went through their paces at five different stations to learn that exercise can be fun.

“We do this once a quarter,” Sandy Joseph, administrative assistant at Fairland West, said. “It is to promote physical fitness.”

Besides the tug of war, the students tried out the Latin rhythms of Zumba, running the track, and Pound Kids, an aerobic-style innovation by music teacher, Susan Dunfee, that combines Zumba and drumming. Students also got to learn about nutrition and making smart food choices.

“We first started doing a health fair after school,” Nathan Speed, physical education teacher, said. “We wanted to do something during the day to make them more active and learn about healthy choices.”

Stay warm this winter with help from HEAP

The winter season is nearly here and the Ironton-Lawrence County CAO is starting its Winter Crisis Program Nov. 1. The... read more