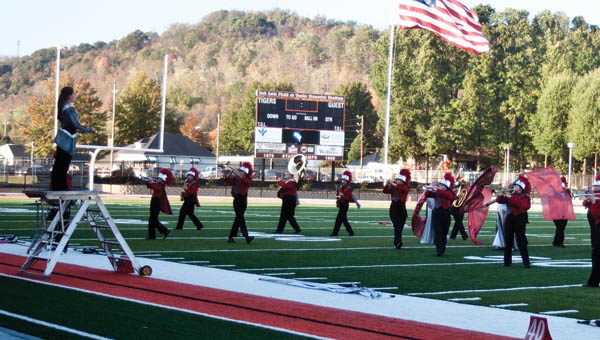 By 3:30 p.m. Saturday Ironton High School band director Jeff Sanders was giving last-minute coaching to his musicians at they gathered in the parking lot across from Tanks Stadium, But it was not for their playing.

That evening the IHS marching band was playing host to the Buckeye Classic, a band competition that has been going on for 28 years. And while Ironton’s band always performs at the classic, the musicians’ duties are far-ranging.

“Each band has a minimum of two guides,” Sanders said. “They will take them to the gate, show them where the water table is and find lost mouth pieces or reeds.”

The classic, which always happens on a Saturday in October, was started by John Parker, former Ironton band director.

“It was the time when competition bands were becoming prevalent,” Sanders said. “He came up with a competition.”

This classic drew bands from 11 high schools from as far away as Caledonia in Marion County.

“Part of the appeal is our facility and the way Tanks Stadium makes the band sound,” Sanders said. “They resonate. A small band will sound big.”

As always the bands were graded on the way they performed their music; their percussion section; marching or visual performance; visual effect; auxiliary members such as guard and majorettes and overall general effect.

Bands are never selected to participate but rather they contact Ironton saying they want to perform on a given year. The contest is advertised and they can sign up through the Ohio Music Education Association.

That association also provides the training for the nine judges who handles one of the six criteria.

“They can’t have any connection with the bands,” Sanders said.

Each band had 15 minutes for its performance with no more than 11 minutes of playing or no fewer than seven minutes.

After all the bands performed, IHS stepped up to do its show based on the music of Bruno Mars.

“He’s popular and I found a couple of arrangements I like,” Sanders said.

IHS band may be introduced to the music in the spring, but the hard work comes in August during a 14-day band camp that runs from 9 a.m.-4 p.m.

But music wasn’t the only thing the IHS band members focused on during the Buckeye Classic. They take seriously their role as host, Sanders said.

“They work very, very hard,” he said. “This takes six months to put together. I am very, very proud when I get compliments on their maturity.”

First ever Hall-OU-Ween Spooktacular successful Being an artist Amy Smith is dedicated to her creation no matter what, even if... read more