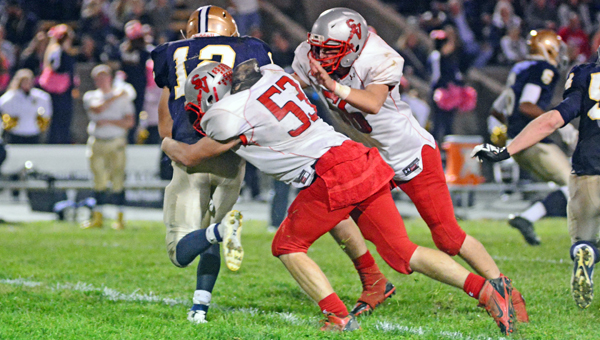 PORTSMOUTH — The Symmes Valley Vikings aren’t greedy. They know how to share.

With Oak Hill beating Northwest on Friday, the Vikings knew they needed to beat the Portsmouth Notre Dame Titans on Saturday to earn a share of the Southern Ohio Conference I football championship along with the two afore mentioned team.

The Vikings not only knew what they had to do, they knew what to do against the Titans as they used a ball-control offense for a 34-14 win.

The championship was even sweeter because Oak Hill and Northwest were the favorites coming into the season.

“You always want to win one outright, but if a share is what you can get, take it and go on,” said Vikings’ coach Rusty Webb. “After the (overtime) loss to Northwest, people probably wrote us off and didn’t give us much of a chance. All we could do is control what we could.

“Our kids came together after that loss. We bounced back and got Green, and then we got East and Oak Hill. Any time you lose a game in overtime it is tough, but our kids did a great job of bouncing back.”

Symmes Valley not only improved to 6-3 overall but finishes 3-1 in the SOC I with a 3-1 record.

The Vikings play Danville at 6 p.m. next Saturday at Athens High School. A win would give them a higher seed in the Division VII Region 25 postseason playoffs.

“We’ve been trying to make this playoff push since week six. We still have work to do. The SOC is over now. We have a big test in Danville. We’re both trying to get in,” said Webb.

After a scoreless first quarter, the Vikings ended a 54-yard, 3-play drive on a 19-yard scoring run by Tanner Mays with 11:11 on the clock. Blake Bowen kicked the conversion.

Following a Titans’ punt, the Vikings scored on the ensuring play as Derrek Smith hit Dillon McFann on a 67-yard scoring strike and it was 14-0.

Symmes Valley got another score with just 2:27 left in the half when Brandon Craft had a 5-yard touchdown run to cap a 57-yard, 6-play drive.

There were only two possessions in the third quarter.

The Titans went 61 yards in 10 plays with Jonathon Major running the final 3 yards for a score. Drew Cassidy’s kick cut the deficit to 20-7.

The Vikings then went on a 57-yards, 14-play drive that spilled over into the fourth quarter. Smith scored on a 3-yard run with 11:51 to play and Bowen’s kick extended the lead to 27-7.

“We just wanted to eat as much clock as we could. We just wanted to do what we do. We picked the time to do certain things and the kids executed them great. The kids did an outstanding job,” said Webb.

On second down after the kickoff, Smith picked off a Titans’ pass and returned it 45 yards for a toucdown and the lead was 34-7 with 11:02 to play.

The Titans scored quickly as they used only four plays to cover 61 yards with Sam Kayser breaking loose on a 32-yard scoring run and it was 34-14 with 9:16 left.

But the Vikings went on a 13-play drive to end the game.

Symmes Valley finished the game with 286 yards rushing on 51 attempts and had 362 total yards.

“Defense has played very well all season,” said Webb. “We’ve been very pleased with the offense since week six. It started to get in sync about then.”