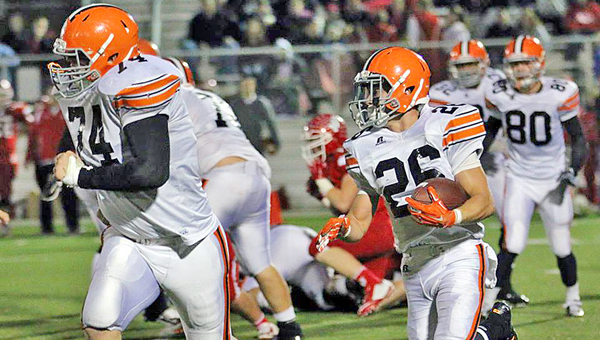 Last season there was a lot riding on the final game of the regular season when the Ironton Fighting Tigers played the Raceland Rams.

Ironton needed a win last year to make the playoffs but lost 17-0. A win this season will secure the Fighting Tigers a home playoff game.

“Our schedule has been the toughest around, and it doesn’t get any easier this week. Raceland is a really good team,” said Ironton coach Mark Vass.

“Winning this game means a lot to us. We’d love to have a home playoff game and get seven wins. And the seniors would love nothing better than to win their last home game.”

The Rams are 8-1 on the season and ranked No. 7 in the Kentucky Class A poll. They are coming off the best season in school history with an appearance in the state semifinals.

One of the big reasons for Raceland’s success last season was Connor Messer.

The 6-foot-4, 175-pound senior returns and he is considered the best all-around athletic in the area.

Besides being an outstanding wide receiver, Messer also moves to the backfield where he can run or throw.

But Messer is far from a one-man show.

Junior running back Kane Snyder (5-11, 211) is a hard downhill runner and senior quarterback Josh Young (6-1, 196) has stepped in this season and the offense hasn’t missed a beat.

“Messer is an outstanding athlete. He’s a big-play threat at any time,” said Vass. “But Snyder is as good of a running back as we’ve seen and I really like their quarterback. He impresses me.”

Although they do not get the attention as the big three, the other skill players have made plays when asked.

“They had a good, veteran line last year. They have a lot of young guys this year, but they’re still pretty good,” said Vass.

The Rams have scored 372 points this season. The only loss was 41-35 at Ashland in the second week.

“They should have beaten Ashland. They turned the ball over a few times and that really hurt them,” said Vass.

Defensively the Rams have allowed just 113 points including three shutouts. They gave up six points in two other games.

The linebacking corps has Walker on one side, junior Seth Holbrook (5-11, 205) in the middles and sophomore Nathaniel Davidson (5-11, 195) on the right side.

Raceland has possibly its strongest secondary in program history with Dixon and Young the corners and Christian and Messer the safeties.