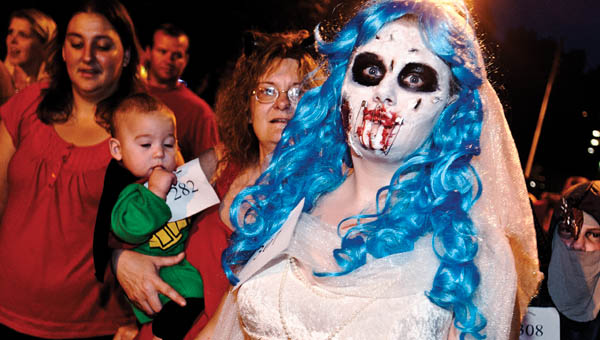 THE TRIBUNE/JESSICA ST JAMES
(ABOVE) Participants in the annual Halloween parade on Monday makes their way down South Third Street in Ironton.

Businesses in downtown Ironton on Monday were overrun with zombies, monsters, ghosts and even SpongeBob SquarePants.

“We had more than the average number of people this year it seems,” Rich Blankenship, Ironton mayor, said. “There were quite a few youngsters and lots of adults as well.”

Blankenship spent nearly two hours handing out candy from a table in the city center during Ironton’s Safe Trick-or-Treat. Several downtown business owners kept their doors open late to accommodate the thousands of trick-or-treaters seeking candy and some who were after a prize from the costume contest sponsored by the Ironton Rotary.

April Fletcher and Ryan Frazer would have made L. Frank Baum proud. Fletcher was dressed as Baum’s Wicked Witch of the East character from the book the “Wonderful Wizard of Oz.” Frazer was dressed as one of Baum’s Winged Monkeys and his daughter, Paige Frazer, 7, was a smaller version of Fletcher’s character.

“We always dress up for this,” Fletcher said. “We feel like we have to for some reason. We always come to the safe trick-or-treat, too. It’s a lot of fun and there’re a lot of people down here this year.”

Many of the businesses ran out of candy just before the 7 p.m. parade. Rent-A-Center on Third Street was running low as the parade was about to begin.

“This is just a good idea,” Andrew Day, assistant manager of Rent-A-Center, said. “It’s safe for the kids and they seem to really enjoy it. It’s also good that the businesses get noticed.”

Many downtown businesses did not feel an immediate economic impact, but many did.

“I drove through town and saw the restaurants and gas station packed with people,” Blankenship said. “More good news is that people remember what businesses participated.”

Katrina Keith, chair of Ironton aLive, touted the events all around benefit.

“Ironton aLive supports the event because it provides our youth with a safe environment to trick-or-treat, plus it gives the merchants an opportunity to open their doors to people that may never come their way,” she said. “Tonight we handed out just shy of 1,000 pieces of candy. We drew people from across the bridge in Kentucky and up the highway as far as Chesapeake. That is a lot of foot traffic for our business district.”

Victim still hospitalized The man arrested in connection with an alleged stabbing last week made his first court appearance on... read more