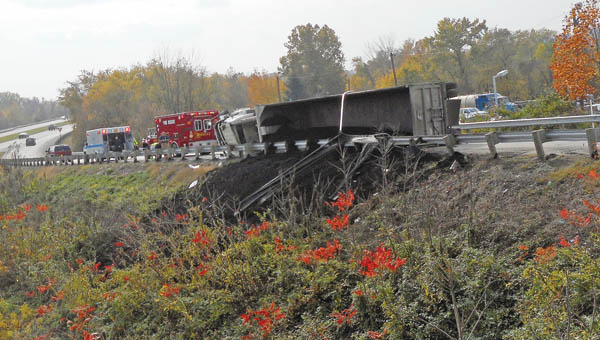 the Tribune/Brandon Roberts
A semi truck hauling 25 tons of coal on Tuesday overturned on the State Route 243 off ramp headed eastbound toward U.S. 52.

25 tons of coal spilled onto off ramp

COAL GROVE — The village of Coal Grove lived up to its name on Tuesday when at 11:40 a.m. a semi truck hauling 25 tons of coal overturned on the State Route 243 off ramp headed eastbound toward U.S. 52.

The driver of the truck, who has not yet been identified, was uninjured but was transported for precautionary purposes to King’s Daughters Medical Center in Ashland by Lawrence County EMS.

“He hit the curve too fast and the load shifted,” Eric Spurlock, Coal Grove police chief, said. “There was no other vehicles involved in the accident.”

At 4:15 p.m. crews were still clearing the site of debris and today crews will clean up the coal that spilled over the hill.

A potion of the guardrail was damaged when the truck overturned.