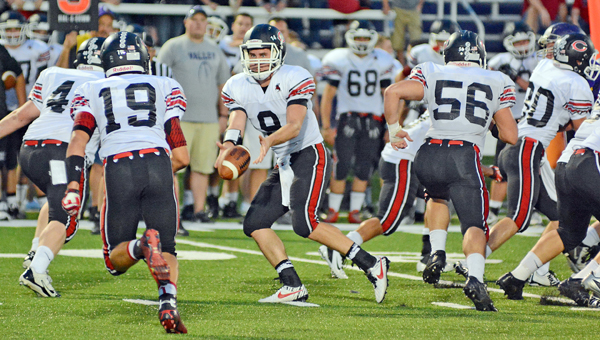 KEYS: The key for Rock Hill will be health. The Redmen have had to use a makeshift lineup each week due to injuries.

Coal Grove is led by running back Isaiah Gunther but he has plenty of help in the backfield from Tanner Murphy, Tanner Dolen, Austin Ruggles and Daniel Rutherford.

The deciding factor could be Hornets’ quarterback Jesse Rigsby and end Joe Akers.

NOTE: Rock Hill is 2-7 and 1-2 in the OVC. Coal Grove is 6-3 and 3-0. The Hornets need the win to not only wrap up the Ohio Valley Conference title outright but also keep their Division VI Region 21 playoff hopes alive.

KEYS: Each team is run-oriented with quarterbacks who are more of a running threat than a passer.

Waverly is led by running back Devon Rigsby and duel threat quarterback R.J. Perkins. The top receivers are Bryan Cydrus and Cole Minshall.

Chesapeake will counter with quarterback Casey McComas who ran for more than 200 yards last week but can throw if the Panthers need his arm.

NOTE: Chesapeake is 6-3 overall hoping to end on an up note. Waverly is 2-7 but the Tigers have one-point losses to Portsmouth and Portsmouth West when a two-point conversion at the end of the game failed. Waverly also lost jsut 21-19 at Coal Grove.

KEY: This will be the South Point defense against the Fairland offense.

The Pointers’ offense has been limited mostly to running backs Mason White and James Leonard. The passing is usually Drew Adams to Stephen Wagoner.

But linebacker Reed Murnahan and White at nose guard have helped the defense play well against opponents.

The Dragons’ offense has been centered all season around quarterback Chance Short.

A healthy Nathan Campbell is a big-play threat at any time. Dylan Murphy is not only a top receiver but an outstanding defensive player.

NOTE: South Point is 2-7 overall and looking for its first OVC win after three losses. Fairland is 1-8 and 1-2 in the OVC.

This game has a lot of playoff implications for both teams.

Symmes Valley is 6-3 and is currently fifth in Region 25 of Division VII. A win could clinch a home game while a loss puts the Vikings on the road.

Danville is ninth in the region and needs to win in order to qualify for the playoffs.

VIDEO GAME OF THE WEEK

Ohio University Southern is televising an area high school football game of the week. The games will be on the Ironton Tribune website and OKTV Channel 25.

This week will be Raceland-Ironton.