Harvest for the Hungry gets large donation 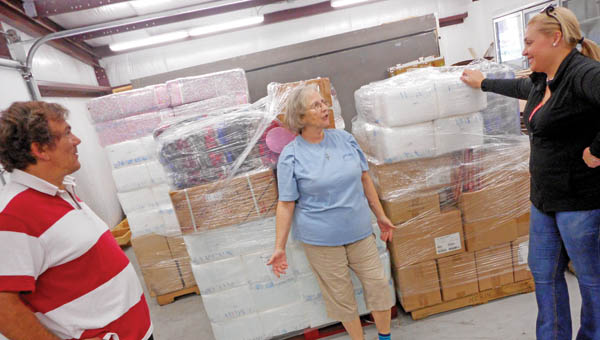 Several pallets fully loaded with blankets, diapers, books, detergent and shoes on Wednesday arrived at the Harvest for the Hungry food pantry in Ironton.

The basic needs were secured by Columbus-based Grandma’s Gifts, a charity organization that works to provide goods and services to children and families in Appalachia, from Alexandria, Virginia-based Americans for Americans, which partners with local organizations to provide food, clothing, blankets, emergency medical assistance and more for people in need.

“If we can help someone with this stuff then we’ve done a good thing,” Michael Hampton, a volunteer at Harvest for the Hungry, said. “It’s good that we got these because I have friends who live underneath the bridge.”

What doesn’t get given out at the pantry is given to the city mission.

“We keep paying it forward,” Diane Porter, director of Harvest for the Hungry, said. “All of this will get to someone one way or another and we love knowing that.”

Grandma’s Gifts, founded by Emily Douglas-McNab in 1993 in memory of her grandmother, Norma Ackison, works to provide goods and services to children and families in Appalachia. To date, more than $12 million in goods and services have been provided. Additionally, more than 650,000 books have been donated to needy children, daycares, hospitals and libraries; more than 10,000 pounds of food have been given to families, domestic violence shelters and food pantries. Volunteer youth and young adults run the organization.

“This means that we support individuals in Appalachian counties in the states of Ohio, West Virginia, Kentucky, Tennessee, Virginia, Pennsylvania, North Carolina, New York and Maryland. Yearly we prioritize our giving and use data to do this.”

Douglas-McNab has worked with Americans Helping Americans in the past; the same organization has donated thousands of turkeys to residents of Appalachian counties through Grandma’s Gifts.

“It’s been a couple of years but we are hoping they will donate again this year,” she said. “Lynd’s is donating apples for Thanksgiving again this year.”

Douglas-McNab’s family is from Ironton and her charity routinely donates to Harvest for the Hungry and many other clothing and food pantries in Appalachia.

SOUTH POINT — Next week voters in the village of South Point will decide if they want to pass a... read more