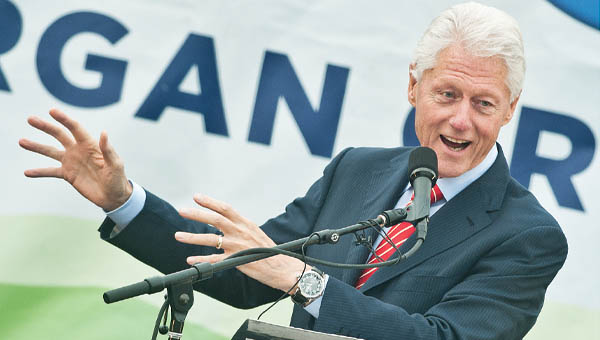 Speaks at Ashland rally in support of Alison Lundergan Grimes

The last time former President Bill Clinton was in Ashland it was 1996 and he was seeking his second term in the White House. He returned on Thursday to support United States Senate candidate Alison Lundergan Grimes.

Grimes, a Democrat, is trying to unseat Republican Sen. Mitch McConnell, a 30-year veteran of the U.S. Senate and the likely majority leader if he and fellow conservatives win and Republicans regain control of the Senate.

The race has garnered national attention for its costs — McConnell’s campaign has spent more than $50 million — and because of its impact on control of the Senate.

“Mitch McConnell wants a bigger office,” Grimes told the large crowd at the Ashland Train Station. “I want you to have a bigger paycheck.”

Grimes, who was recently endorsed by the Lexington Herald-Leader and Louisville Courier-Journal, has been attacked in political ads by McConnell and other conservative groups who have attempted to align her with President Obama, who remains extremely unpopular in Kentucky and other states with large coal mining industries.

Clinton told the crowd McConnell’s ads are attempts to perform “reverse plastic surgery” on Grimes and to “stop you from thinking.” Clinton also said Obama has two years remaining in office and Grimes’ term would be for six years.

“Every year Mitch McConnell runs he says the same things but this year he has more money to say it,” he said. “His message is ‘You may not like me, but you have to like her less.’ (America) is coming back, but it’s up to you to decide what we’re going to look like.”

The loss of coal mining jobs has been a hot-button issue throughout the campaign and Clinton said McConnell’s tactic to align Grimes with Obama is unfair and if Obama has declared a “war on coal,” as McConnell suggests, then Obama is “not a very good warrior.”

“Kentucky has lost 7,000 coal jobs since Obama took office,” Clinton said. “But what about the 20,000 mining jobs lost before Obama took office? In six of his eight years in office President Bush did not one thing to get coal jobs.”

Clinton said the loss of coal mining jobs could be attributed to mechanization, the high demand for low-sulfur Wyoming coal and the increase in natural gas production.

Grimes said she and McConnell differ on other key issues as well such as Medicare, equal pay for equal work and lowering the interest rate on student loans.

“Equal pay for equal work is not a gender issue. It’s a families’ issue,” she said. “Mitch McConnell wants to turn Medicare into a voucher program and he has voted against reducing student loan debt multiple times. With 360,000 students in Kentucky carrying an average of $20,000 in student loan debt it’s obvious Mitch McConnell is beholden to Wall Street.”

Clinton said the median household income in 2008 in Kentucky was lower than it was when he left office in 2000.

“Everybody seems to be so mad during this election and I’m not mad, I’m happy,” he said. “But, I’m concerned because too many people today don’t have the chances I had and I happen to know something about handling this economy and trickle down won’t work. We want to build the future of this country together. We’re all in this together.”