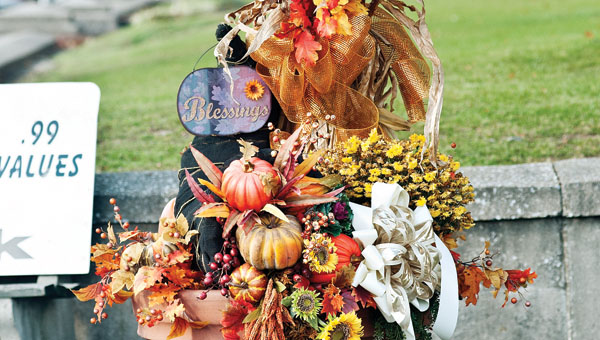 Three winners of Ironton in Bloom’s decorated pot competition can be viewed in front of Ohio University Southern entrance off of State Route 141, on the corner of Park and Fourth Streets on the corner of the courthouse (shown) and along Park and Third streets by Touch of Grace.

The second DecoPots contest by Ironton In Bloom brought about the same response as it did in its inaugural year.

“We were really pleased,” Carol Allen of IIB, said. “If anything, the pots were prettier this year than last year. We received very wonderful and gracious comments from those coming in and out of Ironton.”

The next contest on the horizon for IIB will be the annual storefront Christmas decorations for businesses. This year, those businesses without much window space, can decorate a container in front of their place with a holiday theme.

Before the Christmas contest begins, IIB is teaming up with Ironton aLive for the Sweep Ironton Clean campaign to prepare for the holidays.

“With all the leaves, what we are trying to do is get everyone to sweep Ironton clean so we will be ready for our Christmas season,” Allen said. “We are going to the merchants and mention this as the campaign and if they would like a new bristle broom, we will give them one. We just wanted to back up our words with action.”

The Christmas decorations are to be completed by Small Business Saturday on Nov. 29. People’s choice votes will be collected through Dec. 2 to be announced at IIB’s meeting on Dec. 6. The winner will receive $100.

“That is the people’s choice,” Allen said. “We want them to go into the stores and see what Ironton merchants have to offer for Christmas.”

Turnout expected to be low

On Tuesday voters will select their governor for the next four years between Republican incumbent John Kasich and Democratic challenger... read more