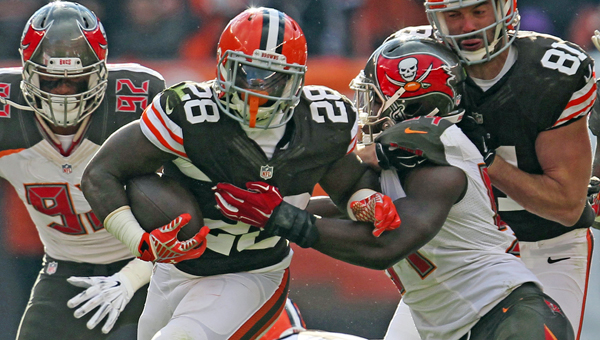 Cleveland running back Terrance West (28) tries to break away from a Tampa Bay defender during the second quarter on Sunday at FirstEnergy Stadium in Cleveland. The Browns won 22-17. (MCT Direct Photo)

CLEVELAND (AP) — The stage will be bigger, the lights brighter, the pressure more intense. Ready or not, the Browns are coming to prime time.

One of the NFL’s biggest surprise teams during this topsy-turvy season in which record and reputation mean very little, the Browns (5-3), winners of four of their past five games, travel to Cincinnati on Thursday night for a nationally televised game against the AFC North-leading Bengals (5-2-1). At the halfway point of their schedule, the Browns have already surpassed last season’s win total and pushed themselves into the early playoff conversation.

It’s time to find out if they belong.

“This will be the best opponent we’ve played in a few games so it will certainly be a good measuring stick because Cincinnati, this year, has been probably the best team in the AFC North,” said perennial Pro Bowl tackle Joe Thomas. “So if want to win the AFC North, we’re going to have to beat Cincinnati and this is our first opportunity.”

Following Sunday’s win over Tampa Bay, the Browns had minimal time to celebrate after improving to 4-1 at home. They did just enough to squeak past the Buccaneers (1-7), who helped Cleveland’s cause with costly mistakes and penalties. It wasn’t eye pleasing, and there were more than a few Cleveland fans annoyed by the struggle, but it was a win and the Browns will take it.

It’s only going to get tougher for Cleveland from here, and first-year coach Mike Pettine is anxious to see how his team stacks up against a quality opponent like the Bengals.

“They’re at the top of the division right now. We know where we stand. We split with the Steelers and lost a tough one at home to Baltimore,” he said. “This is our first chance at the last division rival for us.”

The Browns did not practice Monday, but Pettine said his players came to the facility to lift weights and get treatments. On Tuesday, the team will practice at night in Berea to prepare for Thursday’s 8:25 p.m. kickoff, when the nation will get a chance to evaluate whether the Browns should be taken seriously.

Pettine called it a “critical” game, and the Browns are going to have to be at their best to upend the Bengals, who 13-0-1 at Paul Brown Stadium since 2012.

An equally sobering stat for the Browns is that they’ve lost their past 17 road games inside the division, a dubious streak stretching back to 2008.

But there’s an impressive resiliency about these Browns, who despite key injuries — they’re missing three Pro Bowl starters on offense — have positioned themselves to make this a memorable season. To this point, their schedule has cooperated but will get more challenging as Cleveland will play five road games and face Houston, Cincinnati and Indianapolis at home in the second half.

In order to make a playoff push, the Browns need to re-establish a running game that has stalled the past three weeks without Pro Bowl center Alex Mack. Cleveland gained just 50 yards on the ground against a stout Tampa Bay front seven, and the Browns have amassed only 158 yards rushing the past three weeks.

On Sunday, center Nick McDonald had a rough afternoon going against Bucs standout Gerald McCoy. Pettine believes the entire line needs to play better, but he’s been encouraged by the Browns ability to persevere.

“You go in with a plan that you think you’ll be successful with and it’s rare that a game goes to plan,” he said. “And when you get off script, you have to be able to make adjustments and take what somebody else is giving you and we’ve been able to do that and find a way to win.”

“That’s important to do but at the same time, we’re not going to abandon our approach. We feel over time we’ll get better up front, but we took a step backwards and we’re trying to regain that ground.”

NOTES: Pettine did not know if Pro Bowl TE Jordan Cameron (concussion) will play against the Bengals. The team’s injury report included QB Brian Hoyer (glute) and starting WRs Andrew Hawkins (thigh/knee) and Taylor Gabriel (shoulder). The Browns projected Hawkins would not have participated in any workout. … According to STATS LLC, the last time Cleveland and Cincinnati faced each other in Week 10 or later for first place in the division was in Week 15 of 1986.