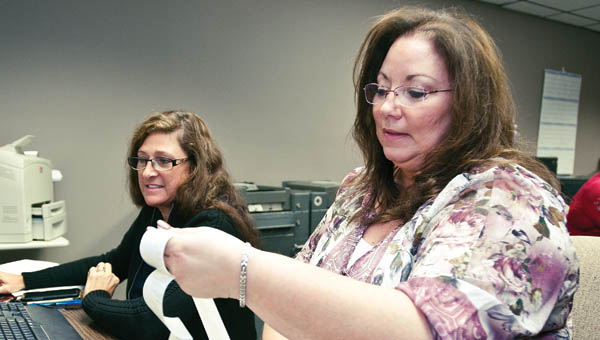 “I am overwhelmed,” Hayes said after the election. “I want to thank my opponent for running a clean race and a very respectful race”

Technical difficulties at the board of elections slowed the processing of returns with first results coming in 90 minutes after the polls closed at 7:30 p.m. But even with just the first 34 precincts in Hayes took the lead. At that point Hayes had 3,656 to Edwards at 2,876.

Pundits had predicted a high Ironton turnout for the flood levy on the ballot would help Edwards. Hayes had 56 percent of the vote, however, even before his home ground in the eastern end had come in.

With the eastern precincts in, those returns pushed Hayes’ margin up almost 5 more percentage points.

Hayes spent almost $14,000 on his campaign, according to his pre-election finance report, to Edwards’ $2,815. But the incumbent said that was not a factor for his win.

“I think it is experience,” Hayes said. “I have proven myself to be a conservative. We have a million dollar carryover for the past two years and we are stopping government waste.”

Hayes was appointed to the commission in the spring of 2012 following the death of commissioner Paul Herrell. He ran his first race that fall to fill Herrell’s unexpired term, beating former commissioner Doug Malone.

Hayes had campaigned on the platform of public safety, pushing for a solution to the overcrowding of the county jail. Edwards countered, however, that the current commission has not offered a way to pay for their plan to move the jail out of the county to a now closed state building at Franklin Furnace.

Making that move is on the top of Hayes’ agenda for his new term.

A call to Edwards’ cell phone was not returned by press time.

The tactic used by Ironton city officials and others to conjure support for the flood levy was simple: talk about... read more