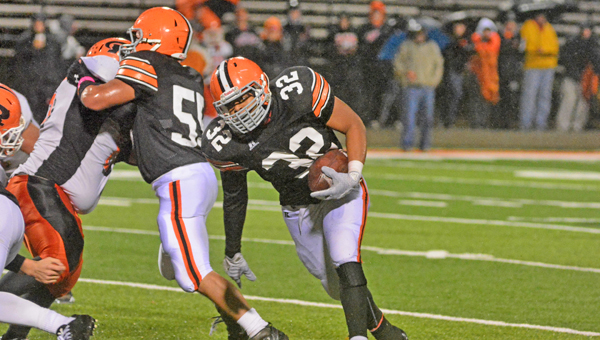 Martins Ferry is called the Purple Riders, and they plan to ride into and on Tanks Memorial Stadium’s Bob Lutz Field Saturday night.

The Purple Riders will match running games with the Ironton Fighting Tigers when the two teams meet at 7 p.m. Saturday in the Division V Region 17 quarterfinals.

“They use a lot of formations, but in the end they usually run the ball,” said Ironton head coach Mark Vass.

“Burress is a real good back with real good speed. He runs out of the I-formation, the wishbone and the wildcat. He’s the guy you have to stop, but he’s not the only guy they have. They have some other good backs, a couple good receivers and their quarterback doesn’t throw much, but he has a big-time arm.”

Barritt has 31 catches for 288 yards and two touchdowns, Fitch 16 receptions for 367 yards and five score and Barbour 10 grabs for 163 yards and three TDs.

“You can’t stack the line of scrimmage because they can hurt you with the pass. They’re pretty balanced,” said Vass.

All five are seniors.

Defensively, Martins Ferry will probably give Ironton a 5-2 look but mix it up as has been the case with all of their opponents this season.

“Their defensive line is pretty solid and they have good size,” said Vass. “They have some speed in the secondary and their linebackers are pretty good. Like I said, they’re a good, solid team. We’ll have to play really well.”

Douglas is the nose guard, Bodkin and Barbour the tackles while Beavers and Burress are the ends.

Burger and Coleman are the linebackers with senior T.J. Jacob (6-0, 183) and Barritt the corners and junior Andrew Hython (6-0, 170) and Fitch the safeties.

Martins Ferry is making its 13th state playoff appearance. They are 8-12 all-time and were state semifinalists in 2004.

Ironton qualified for the 31st time since the playoffs began in 1972. The Fighting Tigers have a 44-28 playoff record with two state titles, six runners-up and 11 semifinal appearances.