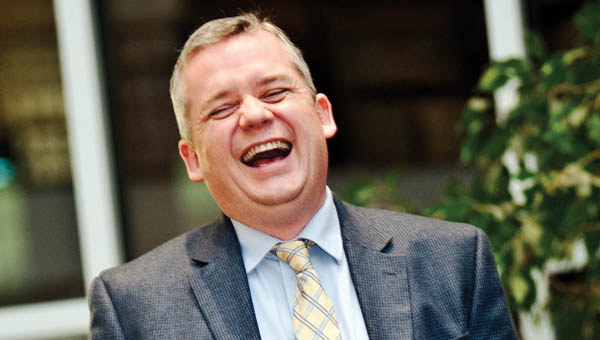 Doug Korstanje lets out a laugh while being presented with the George Patterson Community Servant award for 2014 Thursday at the Lawrence County Chamber of Commerce annual awards dinner.

A former broadcast journalist and community activist has been honored by the Lawrence County Chamber of Commerce.

The presentation was a surprise for Korstanje, who has served in the past as president of the chamber.

Making the presentation was his childhood friend, Stephanie Burcham, who called Korstanje a man with a special heart.

“He gives selflessly and endlessly,” Burcham said from the podium at the Mains Rotunda on the campus of Ohio University Southern on Thursday.

“He loves his people, loves his county and wants to make a difference,” she said.

Among Korstanje’s volunteer efforts are serving on the executive board of the Lawrence Economic Development Corporation, volunteer for the chamber’s Spotlight Dinner, and board member of Leadership Tri-State, the chamber and of the Huntington Museum of Art.

“This is the first time I’ve ever been for a loss for words,” he told the audience, noting the first time he was cognizant of the value of volunteering was from watching his mother and her community work.

Also receiving chamber awards were Katie McKnight as Young Professional of the Year and her work on the organization’s Secret Santa that helps 400 children each Christmas; Weber’s Florists and Gifts as Small Business Advocate; Entrepreneur of the Year to Frisch’s Big Boy; and Glockner South Point Ford as Business Person of the Year.

McKnight was lauded for her positive approach to volunteering and her enthusiasm for her community. Weber’s, a four-generational business, has received national and international recognition for its floral design work. Frisch’s Big Boy has set record sales for the franchise since its summer opening.

“It has pumped thousands of dollars into the economy,” Lawrence County Commission President Les Boggs said as he presented the franchise owners with their award.

And Glockner South Point Ford has brought $11 million in sales tax to the local economy with a $15 million payroll.

Moving the jail to the former Franklin Furnace juvenile center was viewed by the county commissioners as the best option... read more