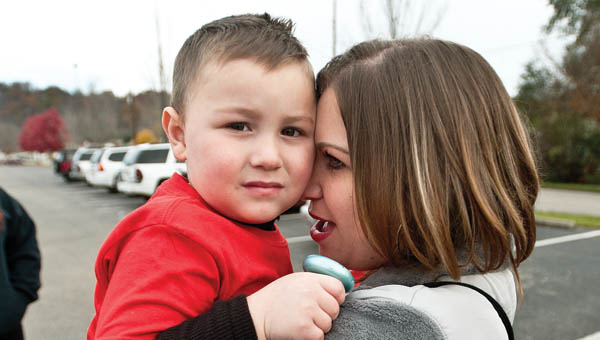 Tina Webb snuggles with her son Miles before heading down to the Joe Swartz Sports Complex for a special game Saturday.

But right now Tina Webb’s world is anything but ordinary. It is filled with love, hope, determination and cancer.

“I am in a fight,” said Webb as she faces another regimen of chemotherapy drugs next week.

But for a few hours on Saturday Webb got one of her wishes to come true, thanks to all of those who love her.

The cold, damp and temperatures at 43 degrees did not stop about 50 friends and their children from coming out to the Coal Grove ball field to watch Tina’s 3-year-old son, Miles, and his buddies play ball.

“This was such a big surprise,” said Webb about a half-hour before the first pitch was thrown. “I was going to put him in soccer, but a few weeks before I found out I have cancer. Now here we are. We are blessed beyond words.”

Webb, who works in adult probation at the courthouse, learned she had pancreatic cancer that had spread to the bone a few months ago Her first treatment was at The Ohio State University, where she underwent a round of oral chemotherapy. Recently she went back, only to be told with treatment she had about a year to live, without it would be three to six months.

That sent her exploring other options. She checked in at the Chicago branch of Cancer Treatment Centers of America.

“They treat the whole,” she said. “Your body, mind, soul. They didn’t give me an expiration date. They told me, ‘This is bad. You will have rough days. But it’s a fight.’ ”

When Proctorville Police Chief Bill Murphy, who is also the president of Coal Grove’s Little League, learned of Webb’s wish, he started organizing Saturday’s event that kicked off with a parade from the Dawson-Bryant Middle School to the ball field.

“We are a big family,” Easterling said. “We are in different departments, but we are one.”

Many in the crowd at the middle school were wearing especially designed Team Tina T-Shirts featuring Webb’s favorite red high heel pumps with lettering in red and purple.

Even the bases at the ball field were painted red and purple.

With Webb on Saturday was her mother, Janet Wagner.

“I think this is fantabulous … the community outpouring,” she said. “She is very positive and upbeat and never gives up. I get my strength from her.”

Battle of Ohio shown at Ro-Na

When the Cincinnati Bengals hosted the Cleveland Browns on Thursday Night Football, the Ro-Na was open to watch the game.... read more