From alcoholic to iron man 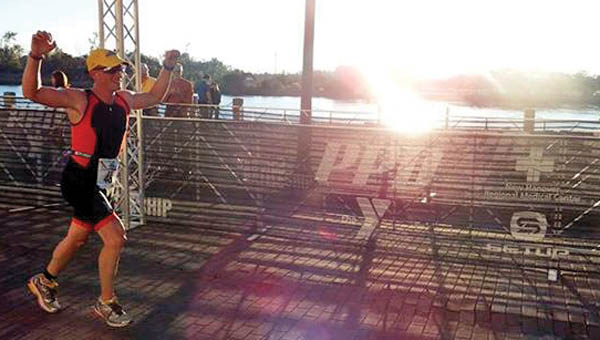 Three years ago Ironton Water Filtration Superintendent Ryan Watts decided he didn’t like the man he had become. So, he traded his beer for bikes, rum for running shoes and wine for the YMCA.

“I gave up all my bad habits and replaced them with fitness,” he said. “I started riding bikes and running.”

After completing two marathons, Watts had an idea.

“I thought to myself, ‘I could complete a triathlon,’” he said.

Once Watts was using exercise instead of alcohol to handle the stress associated with his job and life in general, he began swimming thousands of laps at the Ashland YMCA. That was in February of 2013.

His training for the event, which included a 2.4-mile swim, 112-mile bike ride and a 26.2-mile marathon, was arduous.

“With a full-time job, two daughters and a wife,” he said, “family has to support you when you’re training.”

“Eat, sleep, then do it again,” Watts said. “It’s very demanding mentally and physically. It’s demanding on my family, too.”

Watts said he went into the triathlon with a goal and his dedication to training must have paid off. After arriving in Wilmington for the event, Watts prepared by competing 4 miles of ocean swimming, 178 miles on a bike and ran 42 miles within a six-day period.

At 36 years old, Watts said he can now admit he was in a bad place three years ago.

“I went from an alcoholic to an iron man in three years,” he said. “I have nothing to hide. I admitted to myself I had a drinking problem and it was then I was able to make changes. I put my trust in a higher power.

Since finishing the triathlon less than two weeks ago, Watts now searches for another challenge.

“I find myself wondering what’s next,” he said. “I’ll most likely do another one in the future.”

But for now, Watts said he plans to spend more time with his daughters Lily, 6, and Leah, 3, and his wife, Zanita.

“Without family support, nothing is possible,” he said. “They have been through the same mental torture I’ve been through. The alarm clock going off at 4 a.m. wakes my wife up, too. My kids, rather than looking at an overweight, alcoholic dad, they look at me like a hero. I look at myself as an ongoing success story of someone who has dug themselves out of a rut in their life.”