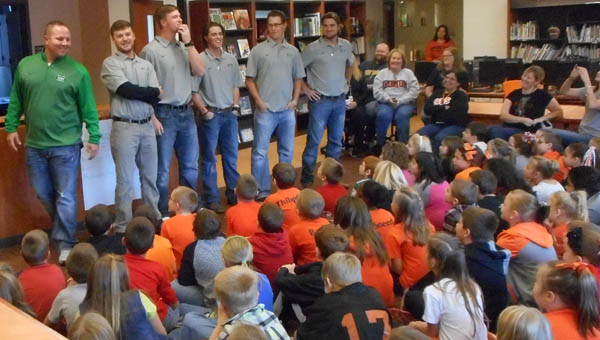 Members of the Marshall Thundering Herd baseball team speak to a group of third-graders at Ironton Elementary as part of “Operation Pay It Forward.”

Ohio State Coach Woody Hayes once said, “You can never pay back, so you should always try to pay forward,” and that’s why five members of the Marshall Thundering Herd Baseball Team were at Ironton Elementary on Friday.

The five players — four pitchers and one first baseman — were participating in the Marshall baseball team’s version of “Operation Pay It Forward,” a group with a mission to “uplift the human spirit through acts of kindness.”

“We are proof that any of you who play sports can make it,” said Sam Hunter, Marshall sophomore pitcher from Ashland. “Playing college baseball has always been a dream of mine. If you have dreams, go chase them.”

The topic of each player’s speech to the students was the same: grades, respect and hard work.

“You have to make the grades to keep playing sports,” Callaway Kirkpatrick, a pitcher from Texas told the group. “You have to do the right things to get where you want to be.”

The players answered students’ questions. Have you ever played a different sport, have you ever hit a home run and who are your heroes were some questions asked to the players.

“These guys don’t hit home runs,” T.J. Diffenderfer, Marshall infielder, said. “All they do is throw the ball.”

“I look up to him not only because he’s from Texas like me,” he said, “but because he is a great example of what hard work can do.”

Josh Newman asked the students who play baseball to stand up.

“Do you know how much making good grades is a part of where they are,” he asked. “These guys wouldn’t be standing here if they didn’t take care of their homework and do the right things.”

“We are called student-athletes because we are students first and athletes second,” he said. “We have to go to class and get good grades first and foremost. That’s why we’re not called athlete-students.”

A good hitter in baseball fails seven out of 10 at-bats, Josh said.

“Life is about adversity and believing you can do it,” he said. “It’s a game of failure, and that’s tough.”

Josh, a Wheelersburg native, played collegiately at Ohio State and professionally for the Colorado Rockies and Kansas City Royals. Marshall pitcher J.D. Hammer also spoke to the students as did Heath Storey, director of baseball operations.

Woodland ceremony is 11 a.m. Tuesday Many schools as well as other groups have planned special events to show their respect... read more