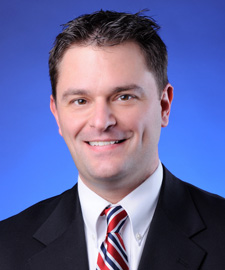 Michael Reeves has been singing since he can remember, mostly at First Baptist Church in Ironton. On Oct. 14, however, he sang to a different congregation.

Reeves, 44, a native and resident of Ironton, submitted an audition video to the National Basketball Association’s Cleveland Cavaliers with the goal of being chosen to sing the pregame national anthem at Quicken Loans Arena

“The video had to be less than 90 seconds per NBA rules,” Reeves said. “I used my phone to record myself and submitted it to the Cavaliers the last day they were accepting auditions in mid-September.”

It took seven attempts before Reeves got the video less than the required 90 seconds. A while later Reeves was contacted by an employee of the Cavaliers

“I was told was a finalist and to please come to Cleveland,” Reeves said.

He made the drive to Cleveland and discovered he was one of 40 contestants vying for a spot.

“I drove up, sang the song, left and came home,” he said. “Soon a coordinator called and said I had been selected to sing the anthem prior to the Cavaliers vs. Milwaukee Bucks preseason game.”

With NBA superstar LeBron James returning to Cleveland and the offseason acquisition of Kevin Love, the Cavaliers are considered a favorite to win the NBA championship this season.

“The place was packed because of all the buzz in Cleveland,” Reeves said. “The atmosphere was amazing.”

Reeves sings often around the Tri-State and is a staple at parades, tree-lighting ceremonies and KDMC events. He has performed three times at Summer Motion in front of 30,000 people and the crowd in Cleveland was around 19,000. He said he could possibly be called to sing before a regular season Cavaliers game.

“I’m blessed to have the voice God provided me,” he said.

U.S. Sen. Sherrod Brown, D-Ohio, has announced that there will be $2,148,524 in federal funds to support Head Start programs... read more