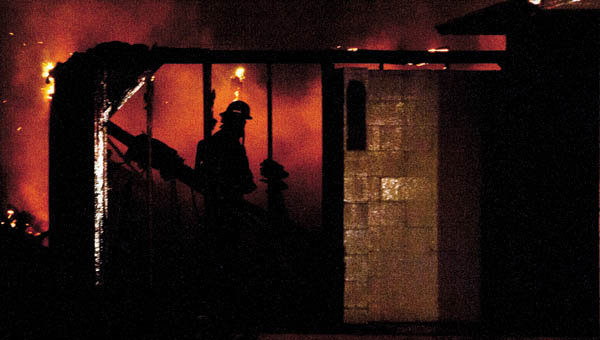 A firefighter from the City of Ironton is silhouetted by the flames of a late night fire on the grounds of the former Fuzzy Duck off of Center Street Tuesday evening.
THE TRIBUNE/JESSICA ST JAMES

An investigator from the state fire marshal’s office is being called in to look at a late evening fire that destroyed a shelter at the Center Street landing The structure was part of the former Fuzzy Duck bar that was recently torn down.

“The way the fire moved it is somewhat not natural,” Tom Runyon, Ironton fire chief, said. “An investigator is coming in.”

The city fire department received the call at 10:07 p.m. Tuesday. When crews arrived, the structure was engulfed.

“The shelter sat on the back side of the property,” Runyon said. “It was fully involved through the roof and starting to collapse.”

Firefighters were on the scene until midnight, the fire chief said.

“We are going to take a good look at it in daylight and see what we can see,” Runyon said. “We had people say they saw someone in the area. We can’t confirm.”

Triathlete example for everyone

According to the National Council on Alcoholism and Drug Dependence, alcohol is the most commonly used addictive substance in the... read more