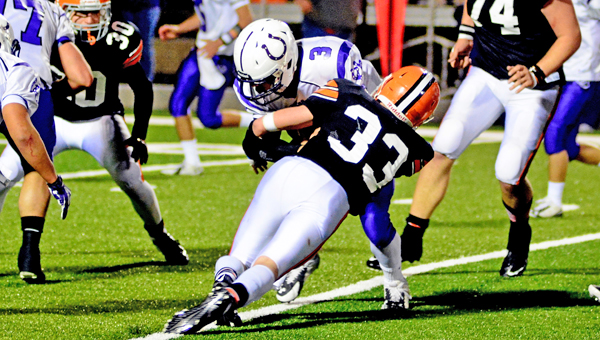 The Ironton Fighting Tigers might want to look into bringing some portable speed bumps.

Ironton (8-2) knows slowing down the Wheelersburg offense will be the key when the two teams meet at 7 p.m. Saturday at the Portsmouth Clark Athletic Complex’s Trojan Coliseum in the Division V Region 17 semifinals of the Ohio High School Athletic Association postseason playoffs.

The Pirates are averaging 256 yards rushing and 151 passing per game.

“Their quarterback is the main guy in their offense, but they have a lot more players than him to worry about,” said Ironton coach Mark Vass.

“(May) is a threat running and throwing, but he’s surrounded by some good weapons and they have a big line that allows them to execute their offense. There’s a reason why they have scored so many points.”

Senior quarterback Austin May (6-0, 160) is the triggerman in the offense. Junior Chasen Burk (6-1, 170) is the both a threat running and catching the football.

The offensive line is anchored by senior guard Gareth Bussa (6-2, 275) and junior center Sam Hall (6-3, 270) who are both returning starters.

The game is a rematch of the season opener.

In that first game, Wheelersburg scored with 21 seconds on the clock to take a 21-16 at the half and pulled away in the second half to win 42-16.

Ironton had 240 total yards including 197 on the ground in the first game, but most of that yardage came in the first half.

The Pirates had 395 total yards in the win with 202 on the ground and May hitting 6 of 9 passes for 193 yards and four touchdowns.

“We played them tough the first half, but they took over in the second half and pretty much controlled the game,” said Vass. “I think we’ve improved, but they have, too. We’ll have our hands full.”

While the offense has racked up points, the Pirates’ defense has limited opponents to 124 points.

“They have a good defensive front. It gave us fits the first time we played. And they have some good linebackers. It’s a very solid unit,” said Vass.

Senior linebacker Mitchell Warner (6-2, 235) is the leader of the defense. Senior defensive end Andrew Conn (6-1, 186) and May at cornerback are the three returning starters from last year.

The other end is Wyatt Mingus (6-0, 180) and Hutchinson is the other linebacker.

The Pirates have another weapon in placekicker Daylor Lewis who is automatic on extra points and has a strong leg for field goals.

Ironton and Wheelersburg have played twice in a season on one other occasion. Ironton beat Wheelersburg 36-12 at home in 1995 and then beat the Pirates 41-8 at Portsmouth’s Spartan Stadium in the playoffs.