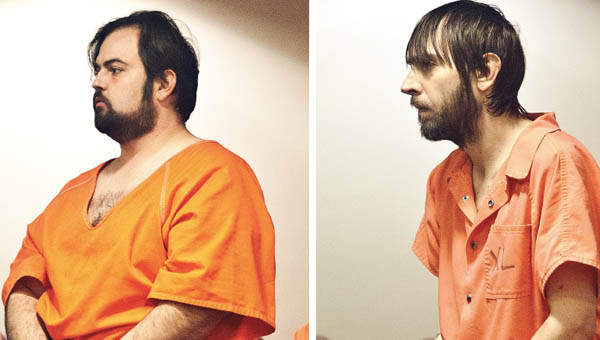 Two men who were arrested Tuesday while allegedly breaking into an elderly woman’s home made their first court appearance Thursday in Ironton Municipal Court.

Chris Destocki, 34, of 1606 Charlotte St., Ironton, and Nathaniel DeLong, 36, of West View Drive, South Point, were each charged with burglary, a felony of the second-degree.

During the hearing, Jeff Smith, assistant prosecuting attorney, recommended bond be set at $50,000 cash or surety.

The two men are expected to return to court for a preliminary hearing on Nov. 20.

According to a report from the Lawrence County Sheriff’s Office, Destocki and DeLong were arrested following a burglary-in-progress call at a home in the 900 block of County Road 7A.

The report, written by Brian Chaffins of the LCSO, said the daughter of the victim, a 67-year-old woman who lives a few doors down, saw the men breaking into the home.

By the time Chaffins arrived on the scene, the daughter was in a “heated argument with the suspects,” according to the report.

“What I gathered from the two arguing was that Mr. Destocki was a friend of the (elderly woman) and had come to visit her. When he found her not to be home, he let himself in through a door he claimed to be unlocked to pee,” the report stated.

A short time later, the homeowner arrived at the home and confirmed she was friends with Destocki, but “he had no business going through her home while she was away. She was also certain she had locked the door that he said was unlocked,” according to the report.

It was at this time Chaffins said he placed the two men under arrest and searched them.

Chaffins said he asked the homeowner to go through the home to see if anything was missing, after which time she reported a pile of cash was missing from her late husband’s desk.

In the report, the daughter alleged her late father and Destocki’s father were former business partners and after her father died a few months ago, “Mr. Destocki immediately befriended the victim and began offering his help with her finances. (The daughter) believes that now after seeing what unfolded that Mr. Destocki had borrowed her mother’s car last week as a ruse to make a copy of the house key because she said she saw a tag from a new key when she had looked in their vehicle.”

After the men were transported to the county jail, Destocki’s 2010 Lincoln was seized as evidence to be later searched.

According to the report, the victim called Chaffins later to report more money missing from a safe in the home — more than $1 million.

“According to the daughter, the money had been in a safe deposit box at the bank but a few months ago, Destocki convinced her to move the money to the safe,” according to the report, so he could help the victim with her finances.

Only the victim and Destocki allegedly knew the combination to the safe, according to the victim’s daughter.

Mayor will apply for ODNR funds

No quorum cuts meeting short The Ironton City Council heard the first reading of four ordinances and adopted one resolution at... read more